Wuhan coronavirus: Videos inside evacuation flight back to US

An American citizen who was on an emergency flight repatriating Americans stranded in Wuhan, China, by the deadly coronavirus outbreak has described his experience on the flight and in the quarantined city.

Speaking to several media outlets, Jarred Evans, who moved to Wuhan to play football, said the city looked like something out of a nightmare after authorities locked it down last week.

„When you’re there, and there’s no transportation, no trains, no subways, no planes, the military is blocking off each and every aspect of the road, you think to yourself: ‚Is this real? Is this a movie? Is this a nightmare? What’s going on here?’“ he told CNN.

The flight took off from Wuhan on Tuesday and landed at the March Air Reserve Base in Riverside, California, on Wednesday.

Evans had just five hours between being told he could board the flight back to the US, and the flight taking off with or without him, CNN reported.

He told the Associated Press (AP) he was simply told: „If you can make it there, you’re on the flight.“

„It was a race against time,“ he said, adding that an acquaintance with a car was able to drive him to the airport.

A total of 195 people were on his flight, he said.

In video footage from the flight, which Evans shared with CNN, passengers can be seen sitting down and milling around on the US military cargo plane. All of them are wearing protective masks.

Video shows that the front section of the plane is cut off by what appears to be plastic sheeting. 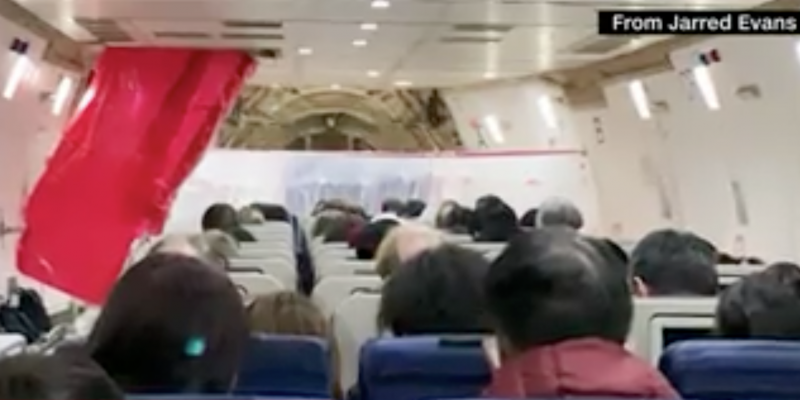 Foto: Screenshot from a video taken by Evans on a flight from Wuhan to the US.sourceScreenshot/CNN via Jarred Evans

Evans also described being given frequent medical checks by staff on the plane during the flight. 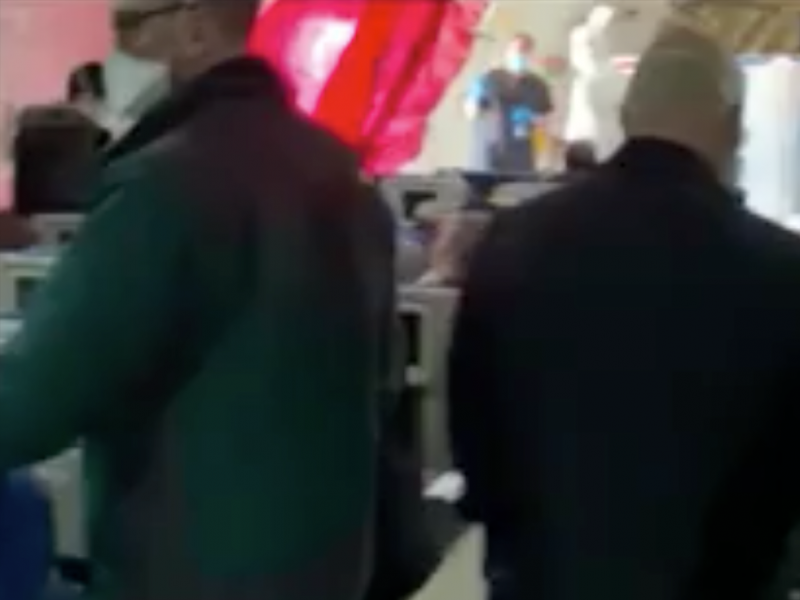 Foto: Screenshot from a video taken by Evans. A medical worker in a hazmat suit can be seen in the top right.sourceScreenshot/CNN via Jarred Evans

After landing, passengers were visibly delighted and relieved, Evans said.

„We were clapping, smiling, laughing … there were cheers,“ he told the AP.

But they did not, Evans said, shake hands out of fear of human contact spreading the disease between anyone who might be infected on the plane.

„No one was shaking hands, that’s for sure,“ he told CNN. 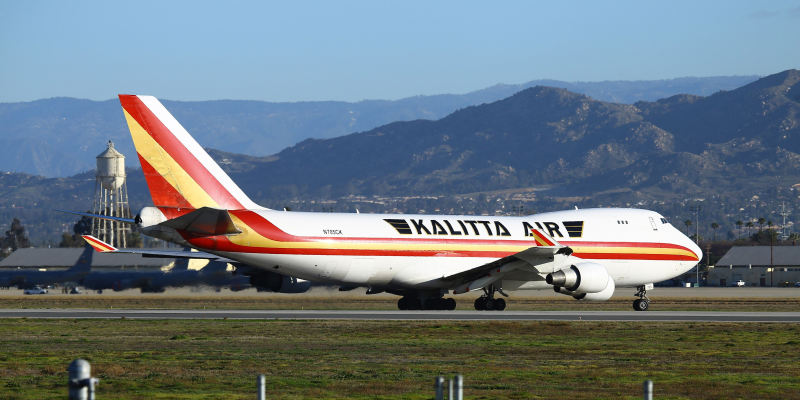 Foto: A chartered plane lands at March Air Reserve Base in Riverside, California, on January 29, 2020, with passengers evacuated from Wuhan.sourceMatt Hartman/AFP/Getty Images

The flight took off from Wuhan on Tuesday and flew across the Pacific Ocean to Anchorage, Alaska, where it stopped to refuel. After landing in Alaska, all the plane’s passengers had their temperatures taken and were given a medical evaluation.

The plane then flew to the March Air Reserve Base in Southern California, where all the passengers are being held until they are proved not to have the virus.

„All we wanted was safety for each other, to get home to our families and friends. We were excited,“ he said.

One of the passengers on that plane „attempted to leave“ the military base after landing, health officials said Thursday. A Riverside County health official told Business Insider’s David Choi the person did not leave the base and was not „trying to do anything sneaky … or anything out of the ordinary.“

The virus, which passes human to human, has now spread to at least 20 countries worldwide. The vast majority of cases are in China, with almost 10,000 people in the country infected, and more than 200 dead.

The World Health Organization declared the outbreak a global health emergency on Thursday.