Wall Street predicts a high-single-digit gain next year, but history shows that is likely wrong

(This story is part of the Weekend Brief edition of the Evening Brief newsletter. To sign up for CNBC’s Evening Brief, .)

A long-ago world leader famously called politics “the art of the possible.”

Wall Street strategists, for their part, practice “the art of the plausible.” Knowing that financial markets in any given year are inherently unpredictable, they construct a reasonable forecast using uncontroversial assumptions.

Yet what is perfectly plausible is, in most ways, not at all probable as the ultimate outcome.

Sounds perfectly sensible and defensible, right? After all, the long-term average annualized gain for U.S. stocks is right in that zone around 8%.

Yet in a counterintuitive quirk, the short term almost never conforms to the long-term average. Since 1928, the S&P has only showed a gain of between 5-10% six out of the 91 calendar years – suggesting the consensus forecast for a high-single-digit rise in 2020 has a 93% chance of being wrong.

A year ago, strategists as a group were looking for an 11% gain for 2019 – but the forecasts was likely as high as it was because stocks had already fallen sharply since October of last year – and the then-aggregate target of 2940 for the S&P was merely a call that the index would recover back to its prior record high.

This was not the popular outlook: “Stocks in 2019 will surge by more than 25% for their best year since 2013 while corporate earnings finish about flat and long-term Treasury bonds will return more than 10%, as the Fed turns tail to cut interest rates three times and successive rounds of tariffs are imposed on China until halfway through December.” Hardly a plausible-sounding story at the time, but exactly what happened.

Oh, and this year’s huge run higher in stocks despite flattish earnings followed last year’s negative equity return in a year when profits surged by 20%. 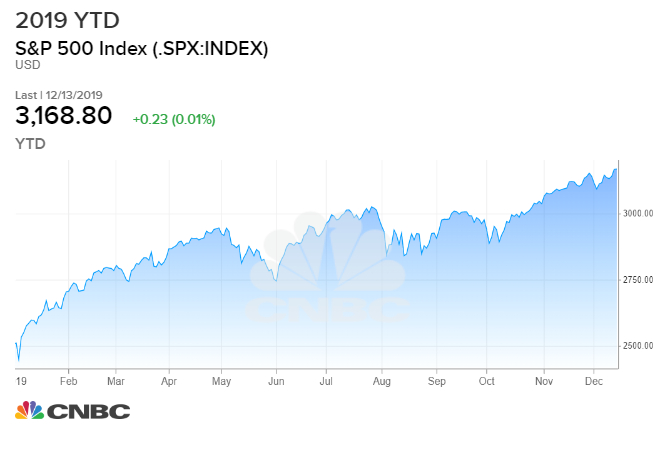 None of which is to denigrate the performance of brokerage-house strategists, for whom arbitrary index targets are a small and thankless part of the job, and who try most often to steer clients to the right parts of the markets rather than nail the number.

But it does help to observe the widely shared expectations for the year to come, if only to gain a sense of what potential trends or market behavior might most surprise the majority.

Sifting through the run of 2020 year-ahead dispatches, the collective best guess goes something like this:

Recession will be avoided and the global economy will pick up in coming months, with U.S. GDP returning toward long-term trend growth around 2%. Corporate earnings will improve to a mid- to high-single-digit growth rate, which should allow for similar progress for an already fully valued equity market. Overseas stocks have a good chance to outperform after years of severely lagging the S&P 500. Within the U.S. market, cyclical sectors should do better than defensive or secular-growth areas. Bond yields probably won’t move much with the Fed on indefinite hold. The first part of the year should be strong – but expect more volatility ahead of the election.

BlackRock Investment Institute comes close to distilling this general view: “Growth should edge higher in 2020, limiting recession risks. This is a favorable backdrop for risk assets. But the dovish central bank pivot that drove markets in 2019 is largely behind us. Inflation risks look underappreciated, and the lull in U.S.-China trade tensions could end. This leaves us with a modestly pro-risk stance for 2020.”

That down years are rare is certainly worth remembering. If indeed there is no recession coming into view, stock markets tend to be able to find a way to make progress, and there are reasons to think this economic expansion can carry on for a while.

Another pattern to toss out there: The very broad NYSE Composite Index last week made a new record high for the first time in nearly two years. LPL Financial’s Ryan Detrick points out that since 1980, it’s gone more than a year without a new highs eight times. One year after a new record was finally set, the index was up one year later all eight times, for a median gain near 14%.

Nothing is ever assured, of course, and this market doesn’t owe investors anything after a 14% annualized total return the past three years and a 18% yearly take since the March 2009 bear-market low. Stock valuations in the U.S. genuinely do appear stout, if not at egregious extremes. And there remain some indicators that look wobbly and resemble prior pre-recession phases.

But with stocks reaching record highs with credit markets sturdy, a perceived scarcity of cash-flow-producing assets globally and no outright overconfidence yet being shown by investors, stocks enjoy some tailwinds that keep alive the prospect that the market could start running well ahead of that plausible pace now predicted by Wall Street’s handicappers.