Trump is reshaping the courts to cement his conservative legacy

While much of the country is focused on President Donald Trump’s impeachment, the Republican party is busy ensuring that Trump’s legacy endures even if his presidency doesn’t.

Working with the White House and the conservative Federalist Society, Senate Majority Leader Mitch McConnell has led the most effective judicial nomination and confirmation process of any modern administration. Trump has already filled more judicial seats, which are lifetime appointments, than any of his five most recent predecessors.

It was McConnell who helped ensure the current administration would have a large number of vacancies to fill on the federal bench by obstructing many of former President Barack Obama’s nominees.

While the confirmation process has become more partisan and politically polarized than ever before, Republicans and Democrats can agree on one thing: Trump is having a massive impact on the federal judiciary.

Here are some notable facts:

Democrats view Trump’s work on the courts as perhaps his most impactful of his presidency so far. Democratic Sen. Chris Coons of Delaware, a member of the Senate Judiciary Committee, previously told Insider that Trump’s judicial confirmations will be „the single most important legacy“ of his administration.

On the same day Trump was impeached by the House, McConnell managed to confirm 13 new district court judges. Democrats are concerned the judges will shape American law with a conservative bent for decades to come.

„Trump’s hijacking of our judiciary will be his most enduring legacy, and it will continue to threaten everything progressives care about long after he leaves office,“ Chris Kang, chief counsel for Demand Justice and former deputy counsel to Obama, told Insider in a statement.

When judges are deemed ’not qualified‘

And since Trump took office, Republicans have abandoned the so-called blue slip rule, which allowed senators from the nominee’s home state to determine whether the candidate should be considered.

A record number of judicial nominees under Trump have been rated „not qualified“ by the American Bar Association (ABA), and seven of them been confirmed. This month alone, the Senate has confirmed two nominees determined to be unqualified by the ABA.

By comparison, none of Obama’s nominees were determined to be unqualified by the ABA.

Earlier in December, the Senate confirmed former Montana solicitor general Lawrence VanDyke, who the ABA described in its devastating review as „arrogant, lazy, an ideologue, and lacking in knowledge of the day-to-day practice including procedural rules,“ to a seat on the 9th Circuit. VanDyke has long advocated against LGBTQ rights.

But the vast majority of Trump’s nominees were deemed qualified or well-qualified and a high percentage of them clerked for Supreme Court justices or on Circuit courts – one indication of candidate quality.

Conservatives hail the rate at which the administration has nominated candidates and at which the Senate has confirmed them, despite aggressive pushback from Democrats.

„Senate Majority Leader Mitch McConnell and Chairman Lindsey Graham have done a phenomenal job filling these vacancies despite continuous efforts to obstruct the process by Senate Democrats and liberal groups like the ABA that pretend to be neutral,“ Carrie Severino, chief counsel at the conservative advocacy group Judicial Crisis Network, told Insider.

Thomas Jipping, a senior legal fellow at the conservative Heritage Foundation, said the ABA is the „most objective“ measure of candidates but argued that Democrats are ignoring the group’s recommendations and making political decisions about nominees „solely because of the president who nominated them.“

While about 7% of Obama’s nominees were opposed by more than 25% of senators, a whopping 46% of Trump’s nominees have been faced with that kind of opposition. Jipping said Trump’s success in filling up the bench so rapidly is even more impressive as a result.

„The context for that progress is the resistance that Democrats have been sustaining from the very beginning,“ Jipping told Insider, adding of Trump, „He’s faced headwinds that no president has faced before.“ 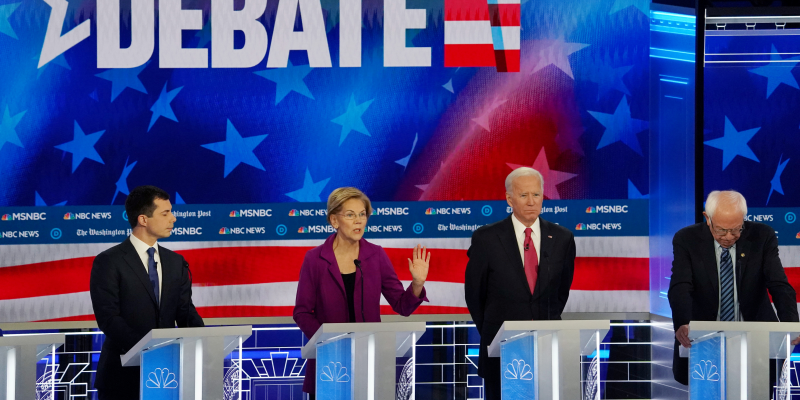 The left’s response: Pack the courts

Some Democrats believe there’s no way to counteract Trump’s influence on the judicial system without structural change, including by expanding the courts.

Aaron Belkin, a political science professor San Francisco State University who founded Pack the Courts, called court expansion „an immediate solution to a lot of our problems.“ He argued a system that requires one political party to have control of both the White House and the Senate in order to confirm judges will „kill the democracy.“

„There’s a growing awareness that basically the entire progressive agenda is dead on arrival because of the courts,“ Belkin said. „What folks are not yet getting is that … the next White House is going to be in handcuffs from day one because even executive orders will not survive the judiciary.“

Pack the Courts has had some success convincing a handful of Democratic presidential candidates to express support for, or at least an openness to, court packing.

Buttigieg’s plan would expand the number of justices from 9 to 15 allow Republicans and Democrats to each appoint five justices, who would unanimously agree on the remaining five appointees.

Court-packing is „no more a shattering of norms than what’s already been done to get the judiciary to where it is today,“ he said in response to a planted question from Belkin’s group at a Philadelphia campaign event earlier this year.

Packing the courts is controversial. Former Vice President Joe Biden and Sen. Bernie Sanders, among other 2020 candidates, don’t support it. Sanders instead supports rotating Supreme Court justices, moving them off the highest court after a set term.