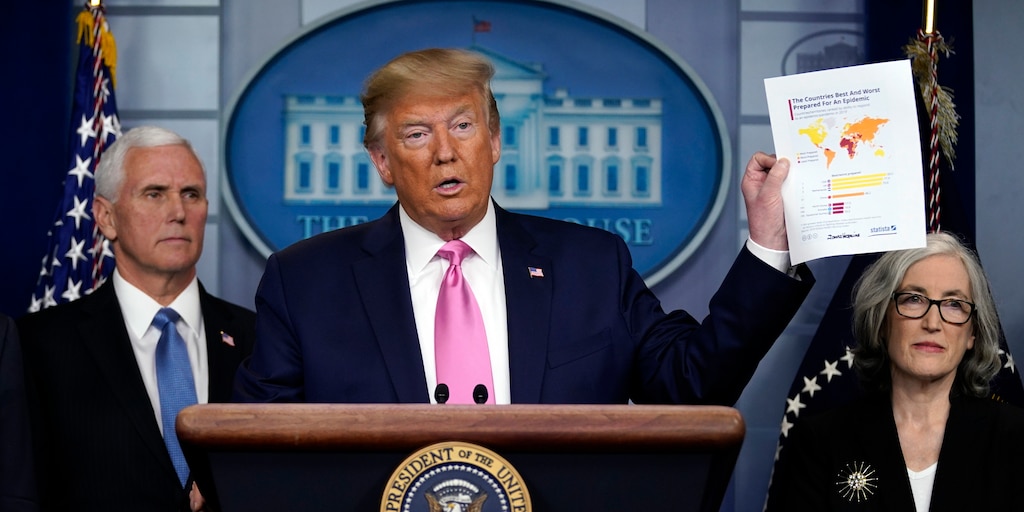 President Trump defended his huge budget cuts to the Centers for Disease Control and Prevention during a Wednesday press conference on the federal government’s response to the coronavirus.

He maintained that it was easy to bolster the public health agency, and cited his business approach towards running the federal government.

“I’m a businessperson, I don’t like having thousands of people around when you don’t need them,” Trump said. “When we need them, we can get them back very quickly.”

The president said that some of the experts targeted by the cuts “hadn’t been used for many years,” and that additional federal money and new medical staffers could be obtained swiftly since “we know all the good people.”

The remarks come amid warnings from CDC experts that the virus’ spread in the US was “inevitable” and urged Americans to prepare. But the Trump administration has spent the last two years gutting critical positions and programs that health experts say weakened the federal government’s ability to manage a health crisis.

In 2018, the White House eliminated a position on the National Security Council tasked with coordinating a global pandemic response. The CDC that same year also axed 80% of its efforts combating disease outbreaks overseas because its funds were depleted.

In its latest budget proposal, the Trump administration sought to cut CDC funding by 16% – even as Health and Human Services Secretary Alex Azar seeks emergency spendingÂ from lawmakers to combat the coronavirus.

It has spread to at least 47 countries so far, beyond its point of origin in China and particularly in Europe. The US hasÂ 60 confirmed cases so far, though the vast majority of them sprung overseas.

Jen Kates, the director of the Global Health and HIV Policy Program at the Kaiser Family Foundation, said in an email to Business Insider that the latest round of proposed budget cuts “would certainly hamper the work of the agency.”

She noted the CDC has “already been grappling with tight resources for addressing the nation’s public health, as well as domestic and global health security threats.”

“To date, such funding has been episodic, typically coming only after outbreaks hit a tipping point and rarely being enough to shore up resources in the long run,” Kates said.

Other experts elaborated on the cumbersome process to shore up a government agency that’s been battered by rounds of budget cuts.

Don Moynihan, a public management professor at Georgetown University, said in a tweet that “once you have gutted institutional capacity you cannot, in fact, quickly restore it.”

Appropriating federal money to the CDC would require a bill from Congress that passes both chambers and gets Trump’s signature, said Bobby Kogan, the chief mathematician for the Senate Budget Committee.

“In addition to requiring a new law to be passed to hire people, you have to actually, you know, spend the time to hire people,” Kogan said in a tweet.