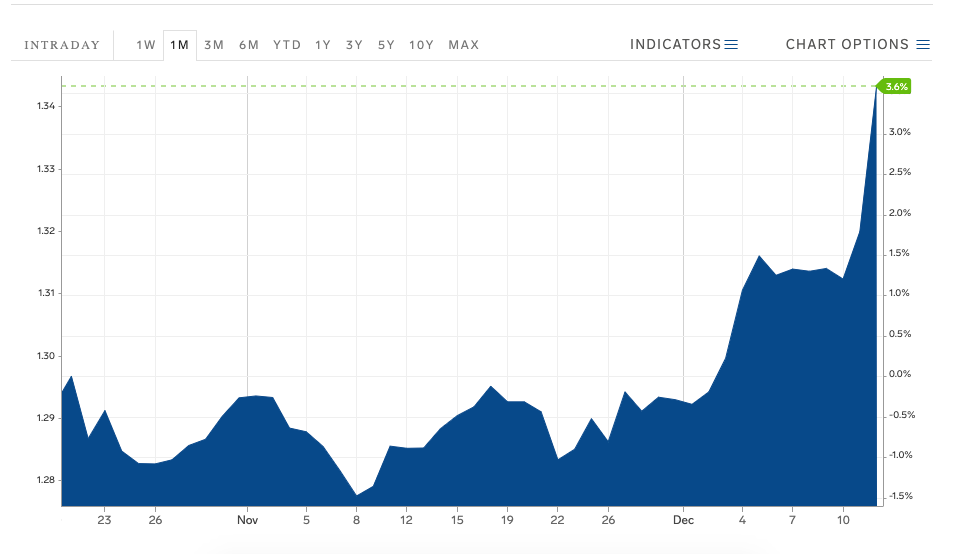 The pound surged on Thursday after exit polls showed a conservative majority in the 2019 UK election, paving the way for a clear Brexit path.

The pound skyrocketed 2.7% against the dollar, to about $1.35 as of 10:47 p.m. in London. It jumped 2.1% against the euro as pound traders cheered the exit poll results, which showed that the Tory party was expected to win a bigger than expected number of seats in Parliament.

Pound traders had been hedging their bets on the election, as a Tory win would have given Prime Minister Boris Johnson a clear Brexit mandate to pull Britain out of the European Union.

“The exit poll shows a whopping victory for the Conservatives and the perfect result for the market and for business,” said Neil Wilson, an analyst at Markets.com. “Markets hate uncertainty but they would have hated a Corbyn government a lot more,” he said, referring to Labour leader Jeremy Corbyn.

“All the fears about a hung parliament have proved unfounded,” he said. “It’s a big enough margin that even if things come in a bit we are in for a Tory victory tonight and looking at a strong Conservative government. If it plays out like this, it would be the biggest majority for the Tories since the heady days of Margaret Thatcher.”

With Johnson’s lead in the polls prior to election day slimming, some traders were worried that the Brexit uncertainty would continue. Goldman Sachs earlier this week said that the election provided considerable risks and traders were piling into hedges against a plunge in the currency.

This is a developing story.