The coronavirus has arrived in the United States, and it is set to put the economy on a downward trajectory just as Americans are deciding who to vote for in November.

This is bad news for Donald Trump. The president’s strongest approval ratings are in his handling of the economy. His basic pitch to ambivalent voters is that they should stick with him because the economy is „the best it’s ever been.“ An economic downturn would undermine this entire argument.

We’ve seen a flailing economy bring down an incumbent party’s reelection bid in the past too. The 1990 to 1991 recession helped deny Republican President George H.W. Bush a second term. And in 2008 the financial crisis dashed late-Arizona Senator John McCain’s hope of keeping the White House in Republican hands.

Regardless of what Trump does to fight coronavirus a downturn is more than likely coming. Now that Wall Street is paying attention, analysts see the impact of the coronavirus‘ spread hitting hard in the second quarter, which starts in April. Things should start to look better in the fourth quarter, which begins in October. 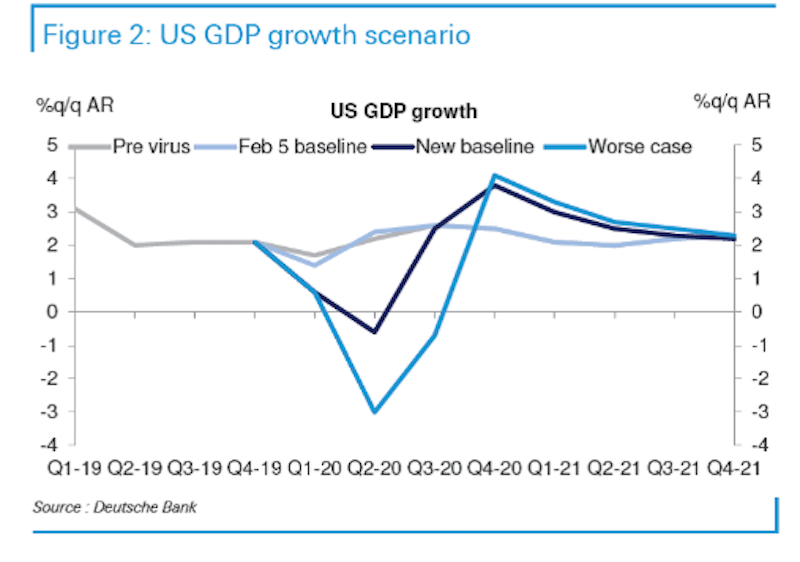 But there is reason to consider that a recession caused by the coronavirus may be stickier than analysts imagine – that this could be a U shaped recovery, one that takes time before the economy bounces back, not a V shaped recovery, which would entail a sharp drop and equally sharp recovery.

Coronavirus is both a supply (not enough goods being produced or delivered) and a demand (not enough people who want to buy them) shock. This is already evident in China’s economic data where last month both manufacturing and service sectors of the economy were walloped with a force unseen since the financial crisis.

Global policymakers aren’t used to this particular kind of problem.

During the financial crisis the world had a demand shock, but there was plenty of stuff to buy. So they had one mission, to stimulate demand. Coronavirus has that problem and the additional problem of frozen factories and broken supply chains. It can create a lack of stuff problem. That is to say, you might want to enjoy sushi while you can.

Last year consumers saved the US economy. While they kept spending, the manufacturing sector was in its worst slump since the financial crisis. Things were supposed to get better as Trump’s trade war with China came to a détente in December, but now the sector has another problem. Since China was shut down to stop the spread of coronavirus, some manufacturers don’t have all the supplies they need to get back to work.

So in a perfect world the US consumer would save us again, but that isn’t looking likely. Already companies are pulling out of big events like SXSW, or canceling employee travel. If this gets worse they’ll start staying home from restaurants, movies, concerts, and other activities that keep money flowing through the economy.

In China we are just starting to understand the impact mass quarantine had on the country. The Wall Street Journal recounted how companies are now having to cut staff and slash paychecks. So far only 30% of China’s small and medium sized business – which make up the bulk of the countries private sector – are back to work.

It remains to be seen whether or not coronavirus will shut down the US economy to that degree, but any loss of income will matter to a lot consumers because Americans are sitting on a pile of debt. US households are sitting on more debt than they have at any other time in history, $1.5 trillion more than during the last debt peak in 2008.

78% of workers live paycheck to paycheck. If they miss debt payments en masse you’ll see that shock the economy. Delinquency rates for consumer loans have already been marching higher, which tends to be correlated with a jump in the unemployment rate. 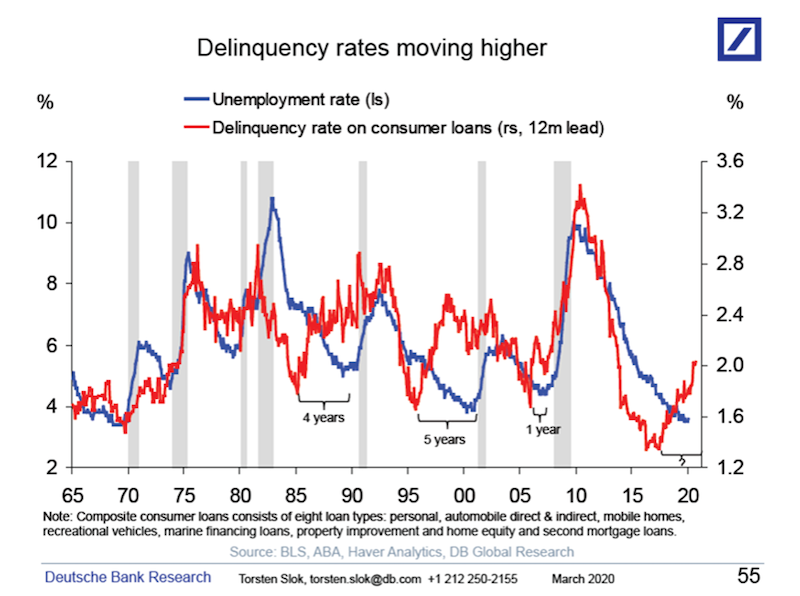 So far Trump’s response to coronavirus has been shameful by any standard. On a phone call he told Fox News‘ Sean Hannity that he thought the global death rate projected by the World Health Organization was inflated, „on a hunch.“ The Center for Disease Control has been so slow to rollout coronavirus test kits that doctors around the country are sounding the alarm. Some test kits were even flawed.

When the news of coronavirus‘ ravages in Wuhan, China reached the US, Trump assured Americans that he was talking to his friend Chinese President Xi Jinping and that everything „was all under control.“ It is clear that during those conversations, it never occured to him to consider preparations for an outbreak in the United States.