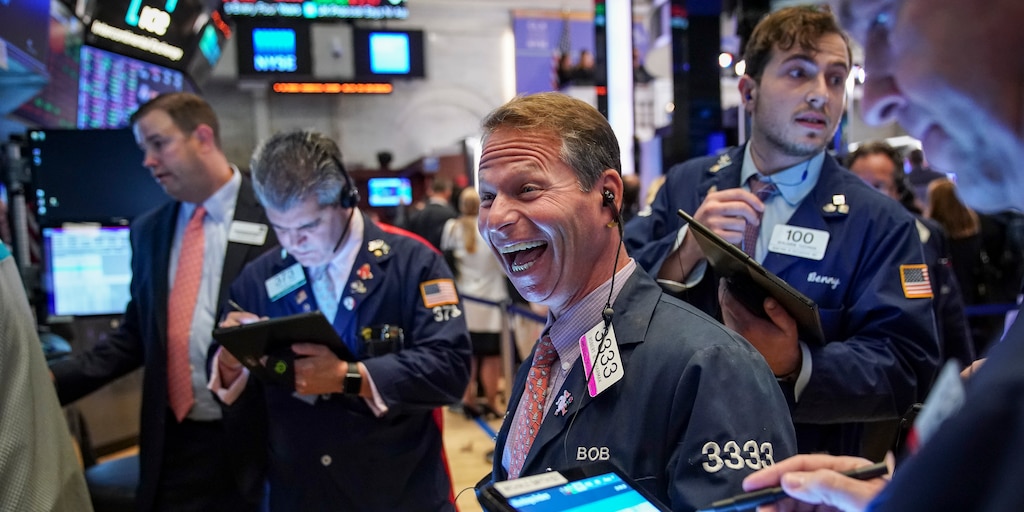 US stocks climbed on Thursday, continuing Wednesday’s gains, as the Federal Reserve announced an additional $2.3 trillion in aid to businesses and governments.

The S&P 500 capped off a 12% weekly gain, its best such return since 1974, while the Dow Jones industrial average rose 13% over the short four-day week. US stock markets are closed Friday for the Good Friday holiday.

The new Fed measures include an array of programs to help boost the economy hit by the coronavirus pandemic. The central bank said it would also buy investment-grade and junk bonds.

Here’s where major US indexes stood at the 4 p.m. ET market close on Thursday:

Read more: ‘The great unwind’: A hedge fund chief overseeing $2 billion explains how a ripple effect could take down the housing market — and warns ‘we’re just at the beginning’

“Main Street should be feeling a slight sense of relief today,” Seema Shah, the chief strategist at Principal Global Investors, told Business Insider. “The latest measures emphasize how committed the Fed is to providing relief and economic support where they can, stretching outside the typical toolkit in order to deliver assistance.”

The Labor Department also reported on Thursday morning that weekly jobless claims hit 6.6 million in the week that ended April 4. The number was slightly lower than last week’s record, which was revised up to 6.7 million.

Still, nearly 17 million filings for unemployment insurance in three weeks is unprecedented, as the coronavirus outbreak continues to wreak havoc on the US economy.

“The catastrophic scale of the COVID-19 crisis is even more apparent,” Ron Temple, head of US equities at Lazard Asset Management, told Business Insider. “While the Fed has acted quickly, it is critical that the fiscal stimulus in the CARES Act be delivered immediately and be of sufficient size to support the economy.”

Stocks gave up some gains in afternoon trading when Senate Democrats moved to block Republicans’ plan for $250 billion in aid for small businesses.

Read more: Morgan Stanley handpicks the 18 best US stocks to buy now while they’re cheap to enjoy profits for years to come

West Texas Intermediate crude oil slid 6% — erasing earlier gains of as much as 12% — as a production-cut agreement between Saudi Arabia and Russia failed to get full approval from OPEC+.

The proposed agreement emerged from a virtual meeting on Thursday in which OPEC+ outlined a deal to slash production by 10 million barrels a day. That fell far short of the expected demand decline of 35 million barrels per day in the wake of the coronavirus pandemic.

Investors also watched the news about the pandemic. US deaths from COVID-19, the illness caused by the coronavirus, were at more than 16,000 on Thursday, with about 450,000 cases. Globally, there were more than 1.5 million cases and 94,000 deaths. Some countries in Asia have seen a resurgence in cases after lifting protective lockdowns, sparking fear that the same could happen elsewhere.

Further, consumer sentiment slumped by the most on record in early April, according to a preliminary reading released Thursday by the University of Michigan’s Surveys of Consumers.

“Consumers need to be prepared for a longer and deeper recession rather than the now discredited message that pent-up demand will spark a quick, robust, and sustained economic recovery,” Richard Curtin, the chief economist of the Surveys of Consumers, said in a statement.

Read more: C.T. Fitzpatrick has beaten 99% of his peers since the financial crisis. He shares his 4-part strategy for dominating a coronavirus-hit market — and names 6 companies that will benefit from the fallout.