Officials in Iran, Italy, and South Korea have begun to address the spread of the new coronavirus as concerns rise outside of China, where the virus originated.

Within China, the virus has infected nearly 77,000 people and has been tied to more than 2,400 deaths as cases of the virus has been found in at least 30 countries.

Nearly two months after the initial outbreak, the virus sparked concerns in the Middle East and Europe that offer examples of the challenges officials are facing to address and contain the virus.

South Korea’s Centers for Disease Control and Prevention reported 161 additional cases for a total of 763 cases within the country early Monday, after President Moon Jae-in described the country as being in a „crucial“ moment for authorities to roll out all possible measures, according to the Associated Press.

Officials also confirmed six deaths as Moon also said the country was raising its national threat level to „red alert,“ the highest level that was also announced as the country faced the H1N1 swine flu outbreak in 2009. 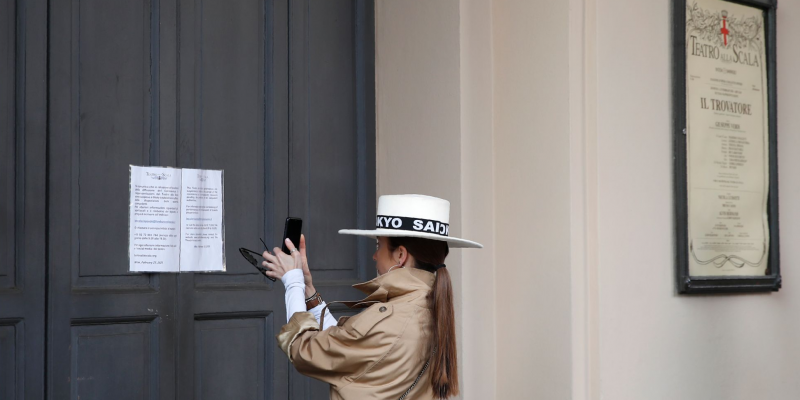 Foto: A woman takes a picture of a notice on the entrance doors, written in Italian and English, advising that La Scala theater performances are suspended due to the spread of coronavirus, in Milan, Italy, Sunday, Feb. 23, 2020.sourceAntonio Calanni/AP

The raising of alarms in South Korea came as officials in Italy scrambled to address the spread of the virus after the country counted 152 cases the largest number outside of Asia, and three deaths as of Sunday evening.

The rapid spike of cases found in major northern cities including Milan and Venice caused the cancelations of the annual Carnival festival and closing of some major landmarks.

The concern appeared to spread across central Europe as officials in nearby France and Austria were monitoring their borders for visitors from Italy that could potentially be carrying the virus, according to the AP.

The Middle East was also on high alert as Iran announced eight people had died from the virus, marking the highest count outside of China.

Afghanistan and Armenia announced on Sunday that they were closing their borders to the country as Supreme Leader Ayatollah Ali Khamenei slammed concerns about coronavirus within the region as an attempt to sow chaos in the country’s elections that were held on Friday.

The new measures deployed on Sunday are signs of rising global concerns that the virus could evade containment and reach pandemic status.

The World Health Organization turned its attention to African leaders, who have already seen cases of the virus on the continent but could face increased risks in 13 countries identified as having direct links to China, WHO Director-General Tedros Adhanom Ghebreyesus announced Saturday, Reuters reported.

A day-by-day breakdown of coronavirus symptoms shows how the disease, COVID-19, goes from bad to worse

The coronavirus may run rampant in some countries least prepared to deal with it. If that happens experts say the virus could become endemic.

A 5-star hotel in Wuhan, the epicenter of the coronavirus outbreak, has opened its doors to emergency workers and stranded guests. Here’s what it’s like inside.