People with other illnesses could suffer because of coronavirus focus

China has been rushing to redirect resources towards fighting the new COVID-19 virus. But that could have consequences for people who were already suffering from other illnesses, Tolbert Nyenswah, a research associate at John Hopkins University, told Business Insider.

„There are other things that are catastrophic for the population,“ Nyenswah said.

China has sent medical workers from across the country to Wuhan, the epicenter of the outbreak. But some estimates suggest the country has less than two physicians for every 10,000 residents, and the coronavirus outbreak has left many overworked and lacking proper supplies.

What’s more, at least 1,700 health care workers have caught the virus, and at least seven have died. That is likely already slowing the response to the outbreak.

Combined, this stress on China’s healthcare system is likely to affect people who currently require care for conditions that are more serious than the novel coronavirus, or might need this care in the future.

The true scope of the outbreak’s impact on those individuals won’t be clear until later, Nyenswah said.

Emily Ricotta, a research fellow at the National Institute of Allergy and Infectious Disease said it’s not uncommon to see these sort of shortages in care for people dealing with other illnesses in times of outbreaks.

„When an outbreak starts, the first response is containment,“ Ricotta said.

That means efforts are directed towards limiting and stopping the spread of this novel virus, creating an imbalance in resources available for other conditions.

People in China are already suffering

People with other pre-existing conditions are already suffering The Wall Street Journal reported.

Wan Ruyi has acute lymphoblastic leukemia and has been waiting on a new round of treatment and a bone marrow transplant, but all the hospital is able to give her is chemotherapy injections and painkillers. Ruyi is reportedly in so much pain that her mother told The Journal she’s questioning if she even wants to stay alive. Ruyi would have go to another hospital in Hubei province, but with the city under quarantine, she wouldn’t be able to travel to a different hospital.

Nyenswah was also Liberia’s Deputy Minister of Health and Social Welfare. During the Ebola crisis in 2014-2016, he worked to bring an end to that outbreak, which he said certainly had a detrimental impact on West Africa’s healthcare system.

While China has a superior healthcare system to Liberia, he said some inferences about the impact on people dealing with other illness during this outbreak could be made based off what happened with Ebola in West Africa.

Nyenswah further explained that the Ebola outbreak had a detrimental impact on West Africa’s healthcare system. According to the CDC, it is estimated that healthcare services were cut in half, which caused setbacks in the treatment and control of other serious diseases. They estimated that 10,600 people died from HIV, tuberculosis, and malaria during the Ebola epidemic from 2014-2016.

Plus, during the outbreak, 513 health workers died in Guinea, Liberia, and Sierra Leone. Liberia lost almost a tenth of its doctors, nurses, and midwives. 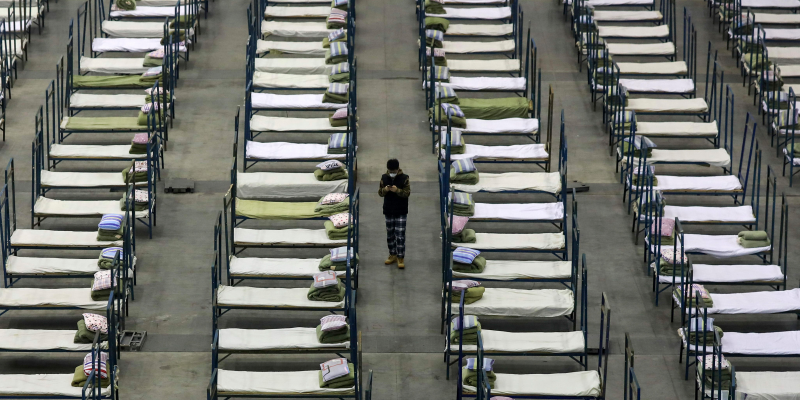 Foto: A worker walks among beds in a convention center that has been converted into a temporary hospital in Wuhan in central China’s Hubei Province.sourceAssociated Press

Lockdowns prevent people from getting care

Several people who have HIV told the The Journal it’s become difficult for them to get access to the medications they need. Mason Chen went to visit his family in the rural area of Xiaogan with 17 days worth of medication before COVID-19 caused cities to implement lockdowns or tightened rules on movement. Chen, who doesn’t want to tell people of his HIV status due to stigma has to travel out of the village to get access to medicine, which he fears would allow people to learn of his status.

Chen told The Journal that one day he left his family home late at night to go to a nearby hospital but was found and beaten up by villagers for „wandering furtively around at night.“ He eventually relented and went to the police for help despite risking being found out. By the time he got a new batch of meds, he only had one days worth of medicine left.

Nyenswah said that in China, the population is aging and dealing with non-communicable diseases. In China, 82% of the health concerns come from conditions like diabetes, heart attacks, stroke, and cancer, the CDC reported. Many of these conditions are more fatal than the coronavirus.

„If the coronavirus is distributing the health care system, it poses a threat to the aging population,“ Nyenswah said.

China put almost 45 million people in lockdown to stop the spread of the virus. The quarantine of people, as well as resources being diverted towards COVID-19 could mean these individuals do not receive the care they need.

Nyenswah called the quarantine a „draconian measure,“ which was enacted out of fear not necessarily a public health concern. He said the fear could prevent people from seeking help for other ailments. In Liberia, he recalled women who would give birth in the street because they feared being exposed to the Ebola virus in a hospital.

Sarah Alexander, an Ambassador with the charity ActionAid, which works with women and girls living in poverty, wrote in 2014 that pregnant women feared visiting a hospital and were wary of travelling to a clinic only to be turned away during the Ebola outbreak.

The Journal also reported that in China, during this COVID-19 outbreak, pregnant women with complications have been turned away from hospitals.

While The Journal reported that Wuhan has designated several hospital for patients not dealing with coronavirus, there are still challenges as a result of a shortage of medical staff and supplies. 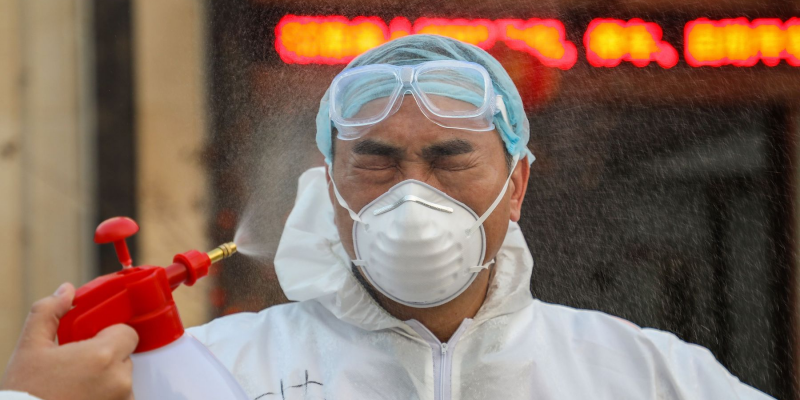 Foto: A doctor being disinfected by his colleague at a quarantine zone in Wuhan on January 3 2020.sourceSTR/AFP via Getty Images

Ricotta also said one of the struggles with the quarantine right now is that ambulances may not be available, so someone who may suffer a heart attack or need urgent attention will not be able to call and get that help.

During the Ebola outbreak, clinics set up to deal with the outbreak sometimes had to turn away people who showed up with other ailments. If they had medications for them, they may give them out but for the most part, those centers strictly assisted those dealing with Ebola.

Nyenswah said he sees the best way to tackle the situation is to isolate confirmed sick individuals and educate the population on ways to protect themselves. He said quarantine policies when dealing with the outbreak „should be based on science“ and not „further exacerbate the situation.“

Ricotta said that once medications become available and that approach can be taken towards dealing with COVID-19, there would more of a balance in attending to patients with other ailments.

Though, there’s no way to tell what the exact toll of the novel coronavirus will have on China’s healthcare system in the long run, the death of healthcare workers is already potentially slowing down the response to the outbreak.

„People with pre-existing conditions, they’re the ones who may suffer,“ Nyenswah said.