While just 60 people in the US have been diagnosed with the Wuhan coronavirus, officials are warning the disease will likely „spread widely“ in the US – a reality that could disrupt upcoming elections.

American health authorities announced Tuesday that the spread of the virus in the US is inevitable and that hospitals, schools, and businesses should begin preparing for a wider outbreak. Preparations should include „social distancing“ measures, or minimizing contact between people to stem the spread of the virus.

US election experts say the virus could have potentially far-reaching impacts on the primaries and general election if it prevents the president and his Democratic opponents from holding campaign rallies, disrupts the parties‘ conventions in July and August, and depresses turnout on election day.

Rick Hasen, a professor of law and political science at UC Irvine, argued that states and localities need a „plan B“ for election day.

„The important thing now, before any disaster hits, is for election officials to come up with a ‚Plan B‘ in the event of a pandemic,“ Hasen told Insider. „The plan should explain how voting might occur under conditions of quarantine or other safety measures.“

But US elections are largely controlled and administered by individual states, the vast majority of which conduct all of their voting in person at polling places.

The Democratic National Committee hasn’t made public any plan it might have to deal with potentially disruptive impacts if the virus continues to spread in the US.

„Our number one concern is to ensure all eligible voters are able to make their voices heard without jeopardizing anyone’s health and safety,“ Maya Hixson, a DNC spokesperson, told Insider. „We will continue to closely monitor as the situation develops.“

State governments and Democratic parties haven’t announced any plans to change voting procedures or otherwise respond to the potential spread of the disease. Some state Democratic parties conceded they hadn’t even considered the possibility of a disruption.

„To tell you the truth, we haven’t thought about any contingency plans for this,“ Matthew Patterson, the executive director of Utah’s Democratic Party, told Insider. „We do have people working [against] disinformation campaigns to make sure people aren’t dissuaded from voting through false information … but in terms of natural disasters, we really haven’t discussed that.“

Patterson added that he expects higher turnout this year than in previous elections, and he’d encourage Utahns to vote by mail. 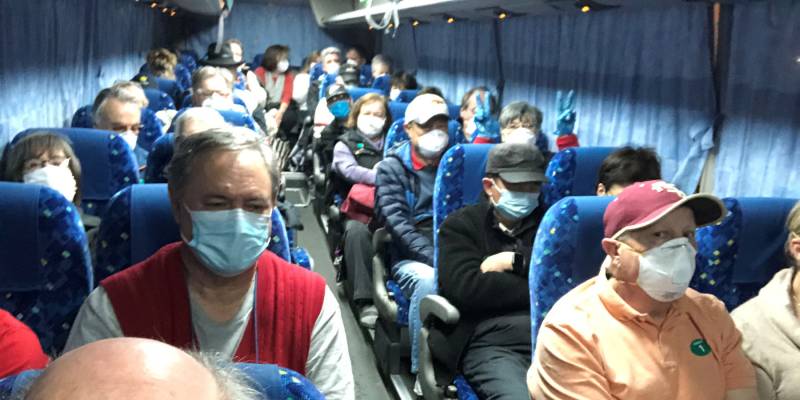 Foto: Passengers on the shuttle bus that brought them from the Diamond Princess to their plane to the US. Source: Courtesy of Philip and Gay Courter/via REUTERS

Jon Stokes, the co-founder of tech news site Ars Technica, argued in a Monday column for Wired that all states should immediately move to a vote-by-mail system for the general election, with funding help from Congress. Only 25 states currently have some form of mail-in voting.

„If we don’t quickly harden our election infrastructure against the imminent threat of coronavirus, we risk electoral chaos and a crisis of governance on a scale that our foreign adversaries couldn’t even dream of instigating via even the most sophisticated electronic election-meddling efforts,“ Stokes wrote.

Other countries are already feeling the effects of the coronavirus‘ political impact. Iran held parliamentary elections last Friday and voter turnout was the lowest since 1979, according to the government.

Some public health experts aren’t ready to predict the virus will impact the 2020 elections.

Jeremy Konyndyk, a senior fellow at the Center for Global Development, said it’s „too early“ to know whether the coronavirus will have any impact on how Americans vote this year.

„One of the measures that’s taken if you have spread of a novel virus, a novel respiratory airborne virus like this one, is to avoid large public gathering,“ Konyndyk, who directed USAID’s Office of Foreign Disaster Assistance during the Ebola outbreak, told Insider. „A polling place is not necessarily a packed environment in the way a movie theater is.“

There is no cure for COVID-19, and no vaccine yet either, though scientists in the US at the National Institutes of Health say one could be ready for testing within months. The best preventative measure is thorough, regular hand-washing.

While relatively little is known as of yet about how the coronavirus spreads, it can be transmitted through close human-to-human contact, including within households and in crowded places.

The World Health Organization announced on Wednesday that, for the first time, more cases of the virus were diagnosed outside China, where it originated, than inside the country.

„All countries, whether they have cases or not, must prepare for a potential pandemic,“ WHO director-general Tedros Adhanom Ghebreyesus said Wednesday. „We are not just fighting to contain a virus and save lives. We are also in a fight to contain the social and economic damage a global pandemic could do.“

Hilary Brueck and John Haltiwanger contributed to this report.