A majority of financial executives in boardrooms around the world say Amazon Founder and Chief Executive Jeff Bezos should be considered as the top businessperson of the decade.

Bezos first launched Amazon in the mid-1990s as an online bookstore. It is now the world’s largest online marketplace and also rakes in revenue from its activities in cloud computing and artificial intelligence.

In 2015, Amazon surpassed Walmart to become America’s biggest retailer. In 2018, it recorded nearly $233 billion in sales. According to both Forbes and Bloomberg’s Billionaires Index, Bezos is now personally worth $109 billion.

The CNBC Global CFO Council represents some of the largest public and private companies in the world, collectively managing nearly $5 trillion in market value.

To other questions asked, almost 71% of respondents said they did not think the U.S. economy would experience a recession in 2020. Notably, EMEA executives were less bullish on U.S. economic prospects with almost half believing U.S. output could contract next year. 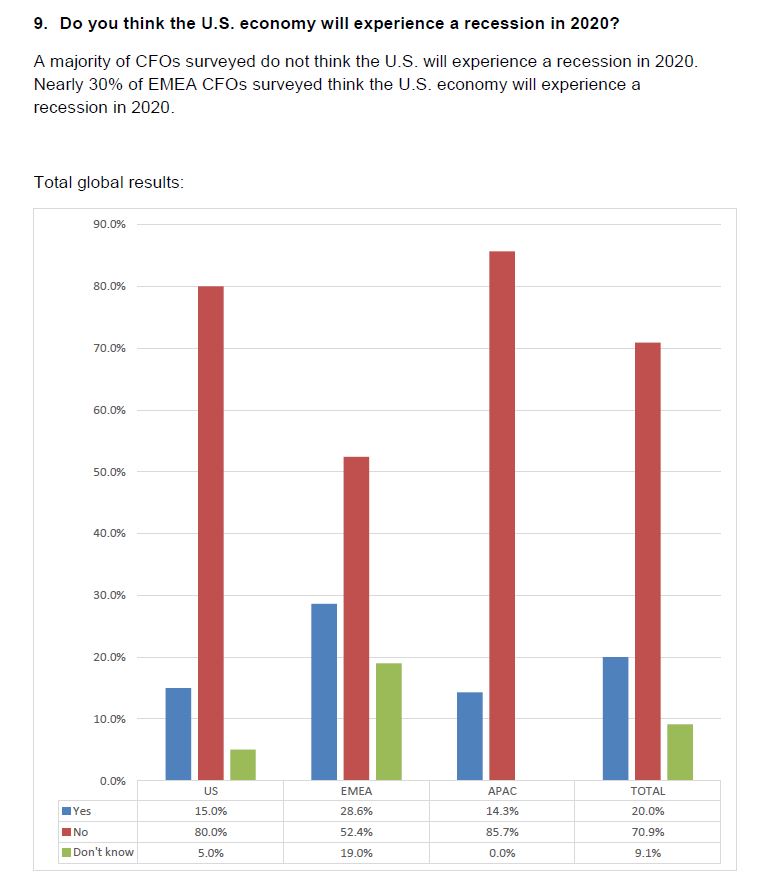 On the matter of stocks, exactly 55% of U.S. CFOs expect the Dow Jones industrial average to rise above 29,000 points rather than the 40% who see it falling back below 24,000 points first. The remainder (5%) were unsure.

The Council’s global economic outlook has dipped slightly on a geographic basis. Now, four of 11 countries or regions — China, euro zone ex. U.K., Latin America ex. Brazil and the United Kingdom — are all seen as “declining.” All other areas were rated as “stable.”

(Note: 55 of the 135 current members of the CNBC Global CFO Council responded to this quarter’s survey, including 20 North American-based members, 21 EMEA-based members and 14 APAC-based members. The survey was conducted from Nov. 20–Dec 3., 2019.)