Scores of influencers and celebrities are being criticized for flocking to Saudi Arabia’s capital Riyadh for the MDL Beast festival, images of which then flooded the social feeds of various musicians, models, and celebrities.

As was previously reported by Insider, the Saudi government has in the past gifted all-expenses-paid tours Instagram influencers to offer a curated experience that they can document and share to improve the country’s reputation and spark tourism industry, and gloss over the country’s track record of human-rights abuses.

According to reports and photos posted online of the music festival, some of the most well-known attendees were actors and musicians including Armie Hammer, Ed Westwick, Ryan Phillippe, and DJ Steve Aoki, alongside models Winnie Harlow, Alessandra Ambrosio, Stella Maxwell, and social media figures like Sofia Richie and Scott Disick.

Diet Prada, a fashion and culture commentary Instagram account, offered one of the first critiques of the influencer-magnet event in a post that rounded up photos from the festival in addition to allegations of paid appearances and criticism from other models and fashion heavyweights.

The caption on the post called attendees out for „cashing big fat checks in exchange for #content creation (aka propaganda) to rehabilitate the image of Saudi Arabia.“

The post also referenced some of the kingdom’s most notable human-rights abuses, including the brutal October 2018, killing of journalist Jamal Khashoggi by Saudi operatives, the May 2018, arrest and deportation of women’s rights activist Loujain al-Hathloul.

What’s worse than an all white @revolve influencer trip? Cashing big fat checks in exchange for #content creation (aka propaganda) to rehabilitate the image of Saudi Arabia, a country said to be causing “the world’s worst humanitarian crisis”, according to the United Nations. According to anonymous sources, six-figure sums were offered for attendance and geo-tagged posts. ⠀⠀⠀⠀⠀⠀⠀⠀⠀ Following the government’s pre-meditated murder of journalist Jamal Kashoggi in October 2018 , the arrest of women’s rights activist Loujain al-Hathloul in May 2018, the outing of a gay Saudi journalist and his partner who began receiving death threats from their families (homosexuality is a crime in Saudi Arabia and punishable by death), and countless other human rights abuses, a bevy of supermodels, influencers, celebrities, and musicians convened in Riyadh for the inaugural @mdlbeast . According to @hypebeast , the electronic music festival is “one of the most significant musical events the region has ever seen”. ⠀⠀⠀⠀⠀⠀⠀⠀⠀ Saudi Arabia has been spending billions to change its image in the west, but this is sure to be the most expensive campaign yet. In a series of Instagram stories posted by transgender model @teddy_quinlivan , it was revealed that fellow model @emrata had turned down the trip, evidently aware of the country’s human rights crisis. “It is very important to me to make clear my support for the rights of women, the LGBTQ community, freedom of expression and the right to a free press. I hope coming forward on this brings more attention to the injustices happening there”, said Ratajkowski in a statement to Diet Prada. ⠀⠀⠀⠀⠀⠀⠀⠀⠀ Unfortunately, not all shared the same sentiments. There are simply too many attendees to name. Dieters, feel free to tag any attendees you know of… just in case they haven’t been reading the news. • #propoganda #jamalkashoggi #humanrights #humanrightsabuse #lgbtq #lgbtqrights #freespeech #journalism #independent #womensrights #mdlbeast #edm #electronicmusic #supermodel #influencer #content #riyadh #emrata #emilyratajkowski #teddyquinlivan #model #celebrity #dj #electronicmusic #musicfestival #wtf #smh #government #corruption #dietprada

In one photo posted by Richie, the caption „Saudi girls“ was roundly criticized, given that women’s rights activists have been detained and allegedly tortured, as Insider previously reported.

I’ve been too busy working to realize that a raft of influencers were just paid (again) to fly to Saudi to brighten MBS’s image. Seeing the caption “Saudi girls” is especially grating when I think of Saudi women’s rights activists jailed or exiled for pushing for basic freedoms. pic.twitter.com/lPd8YjrQVN

Richie posted the picture from Riyadh’s posh Ritz-Carlton hotel, the same hotel that Saudi Crown Prince Mohammed bin Salman used to detain an undetermined number of prominent Saudis who were held under the guise of anti-corruption efforts.

A screenshot posted by Diet Prada also showed screengrabs from Teddy Quinlivan’s Instagram, criticizing influencers who attended and revealing that Emily Ratajkowski had turned down the festival.

In the Instagram post, Diet Prada referenced the practice of the Saudi government to pay for trips for influencers. Journalist Yashar Ali also posted to Twitter saying, „A major film/tv star tells me that she and her husband were offered 8 figures, through their representatives, to go on this trip but declined.“

Previously, in seeking to shake its existing reputation involving brutal human-rights abuses and the oppression of women, the government composed luxe travel packages to open up the previously guarded country to prominent influencers that can be seen in posts from figures like Scott Disick and Jay Alvarrez.

Influencers told Insider’s Bill Bostock that it appeared the government had devoted a massive amount of money and resources to the effort, and some said they declined the trips on principle.

Karen Attiah, the global opinions editor at The Washington Post, and Khashoggi’s former editor tweeted to praise Diet Prada’s post and call out „the dark side of influencer culture is that it really is the ultimate expression of capitalism.“

„Money over human lives,“ Attiah wrote. „What good is your platform if you overlook the Saudi regime’s murder and torture for a few bucks? These influencers are just for-hire human billboards.“

I’m rooting for the Saudi people, from all walks of life — that they one day will enjoy more than just driving and concerts, but more freedoms and economic prosperity.

Attiah also noted on Twitter that women’s fashion and lifestyle magazine Glamour accepted a paid social media campaign with the festival, which partially included posts on the magazine’s Instagram account that offered an inside look at the event.

At the center of several of the high-profile invites appears to be Mohammed Al Turki, a Saudi film producer whom GQ Middle East wrote in September 2018 „has become a key catalyst in the rapid expansion of Saudi’s film and arts culture.“

Al Turki told the magazine that his goal was to develop a „whole film scene in Saudi, from film festivals to studios to a media city,“ ultimately making „a full-on film society culture in Saudi.“

The producer’s Hollywood ties were on full display at the festival, where he was pictured rubbing shoulders with Armie Hammer, who also posted an Instagram photo with the producer, and Ryan Philippe, among others. 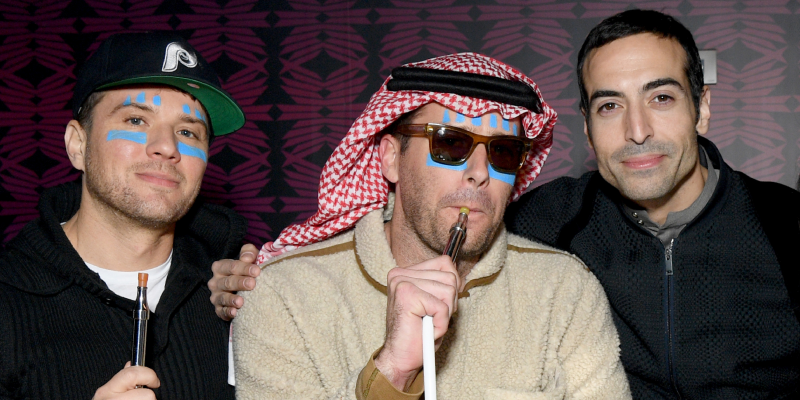 Insider’s requests for comment from Condé Nast and Glamour were not immediately returned.

Nearly half of influencers think their job impacts their mental health, from body image to facing scrutiny of their integrity and work ethic