As we get ready to say goodbye to the 2010s, CNBC.com is taking a look back at the key players, events and transformations from Wall Street to Silicon Valley to corporate America to the White House that shaped a “Decade of Disruption.” In the lead-up to New Year’s Day 2020, CNBC’s online journalists will be exploring the moments that defined the past 10 years for your money and set the table for the next decade and beyond.

Two years after the collapse of Lehman Brothers in the 2008 financial crisis, hedge fund billionaire David Tepper made a bold market call on CNBC about the power of the Federal Reserve that made investors money all decade.

Central banks here and around the world have kept interest rates very low — and in some places, Europe and Japan, rates have gone negative. U.S. stocks have been the beneficiaries, propelling equities from their March 2009 lows to their longest and best-performing bull market ever.

On “Squawk Box” on Sept. 24, 2010, Tepper took the old adage, “Don’t fight the Fed” to the next level. The founder of Appaloosa said that U.S. central bank efforts to support the economy with near-zero rates and massive bond buying, known as quantitative easing, will make most investment choices go up.

Who is David Tepper?

Tepper, a Pittsburgh native, started Appaloosa Management in 1993, and grew it into a powerhouse, returning 25% a year, making clients and himself billions of dollars. In 2016, he changed his tax residency and corporate headquarters from New Jersey to Florida, where there’s no income tax.

He made a name for himself during the financial crisis through investments in depressed bank securities and other bold calls over the last 26 years. Tepper’s fund made $7.5 billion in 2009 on a return of 132%, made mostly by betting on a resurgence in financials.

In May, Tepper said he’s planning to return Appaloosa’s capital to investors, converting it to a family office. Appaloosa managed about $14 billion in assets, according to recent estimates, with Tepper’s own money making up about 70% of the fund.

Sources told The Wall Street Journal that Tepper was looking to concentrate on managing the Carolina Panthers NFL franchise, which he purchased last year for a record $2.2 billion.

Tepper’s net worth is estimated at $12 billion, according to Forbes. He’s known as one of the most successful hedge fund managers of his generation and also a generous philanthropist. Tepper, 62, got his MBA at Carnegie Mellon, and he’s donated more than $100 million to the school.

In his 2010 analysis of the market conditions and central bank climate then, Tepper talked about the Fed “put” — or the equivalent of an options play, in which the government will do whatever it needs to keep the capital markets from sinking below a designated level.

“What, I’m going to say, ‘No Fed, I disagree with you, I don’t want to be long equities?'” said Tepper at the time. “We’re a bond place, but we changed up to a little bit more equities recently.”

What, I’m going to say, ‘No Fed, I disagree with you, I don’t want to be long equities?’

Shortly after Tepper’s September 2010 appearance, the Fed in November of that year announced QE2. The first round of QE had ended in March 2010.

The Fed-driven stock market rally that ensued became known as the “Tepper rally,” with the S&P 500 gaining about 45% until then-Fed Chairman Ben Bernanke discussed in June 2013 slowing what was then the third round of QE.

In May 2013, as talk was rampant about whether the Fed was going to reduce the pace of asset purchases, Tepper said investors should not fear a Fed “taper,” because such action is needed to keep the stock market steady by preventing it from going into “hyper-drive” and flaming out.

Tepper’s introduction of the word “taper” into Wall Street parlance and the market drop that followed the Fed’s December 2013 tapering announcement was dubbed the “taper tantrum.” Central bankers ended Q3 about 11 months later. It wouldn’t be until December 2015 that Wall Street would see the Fed’s first rate hike since 2006. 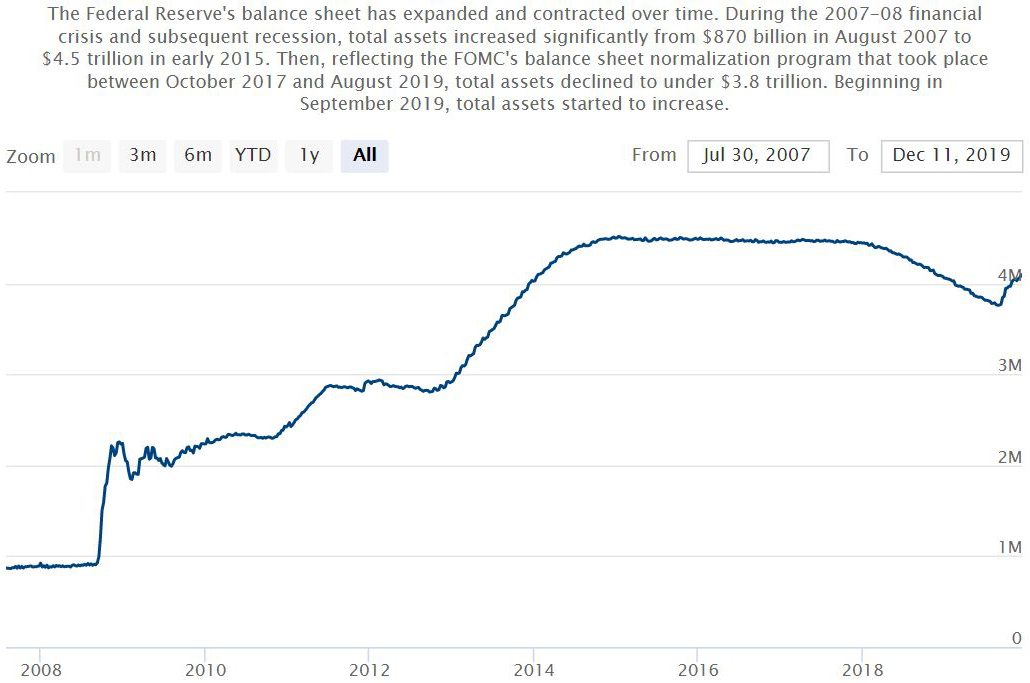 Between 2008 and 2015, the Fed’s balance sheet, its total assets, ballooned from $900 billion to $4.5 trillion. Since then, the central bank had been taking steps to reduce its balance sheet. But recently, the Fed balance sheet has been on the rise again, in response to demand for bank reserves. But Fed officials stress that this latest move is not QE4.

However, as the 2010s draw to a close, the Fed and its global cohorts are in need of some new tricks, leaving investors to wonder whether Tepper’s prescient words nearly 10 years ago will prove to continue to be a profitable strategy in the future. The stock market was trading at record highs, as of Tuesday’s close, with just days left in 2019. The S&P 500 has skyrocketed more than 27% this year, tracking for its best year since 1997. 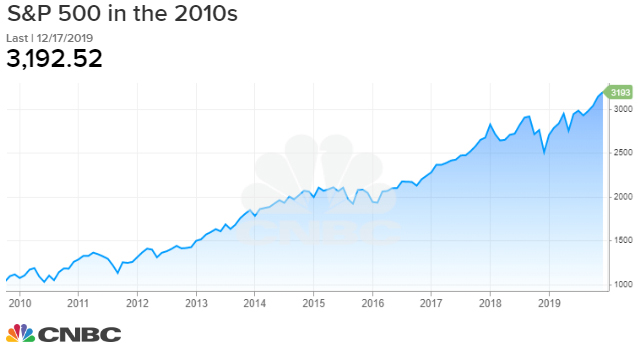