At SpaceX, the rocket company founded by Elon Musk, progress sometimes looks like a dramatic explosion and an assembly line of shiny new spaceships.

During a fuel-tank-pressurization test on November 20, an accidental explosion blew the top off SpaceX’s first 16-story prototype of Starship, a steel rocket system that may one day ferry colonists to Mars. However, just five weeks after that failure, Musk said a brand-new version of the rocket ship may launch before the end of March.

„First flight is hopefully 2 to 3 months away,“ Musk tweeted over the weekend.

Musk shared the video while visiting SpaceX’s work yard in Boca Chica, Texas, where workers were toiling away on new domes for the ship. The 30-foot-wide domes cap a Starship’s fuel tank, and it is the same part that popped off the first prototype, flew hundreds of feet into the air (as one video on YouTube shows), and smacked into marshy grasses across the road from the company’s launch site at the southern tip of Texas.

„Was up all night with SpaceX team working on Starship tank dome production (most difficult part of primary structure),“ Musk tweeted with a video showing parts being worked on.

Musk also added: „We’re now building flight design of Starship SN1, but each SN will have at least minor improvements, at least through SN20 or so of Starship V1.0.“

Put another way, Musk is not feeling too attached to Starship prototypes because SpaceX may build as many as 20 different versions before engineers settle on a „1.0“ design to fly cargo and people.

One of those passengers includes the Japanese tech entrepreneur and billionaire Yusaku Maezawa, who has purchased Starship’s first crewed flight around the moon for an unknown sum of money. 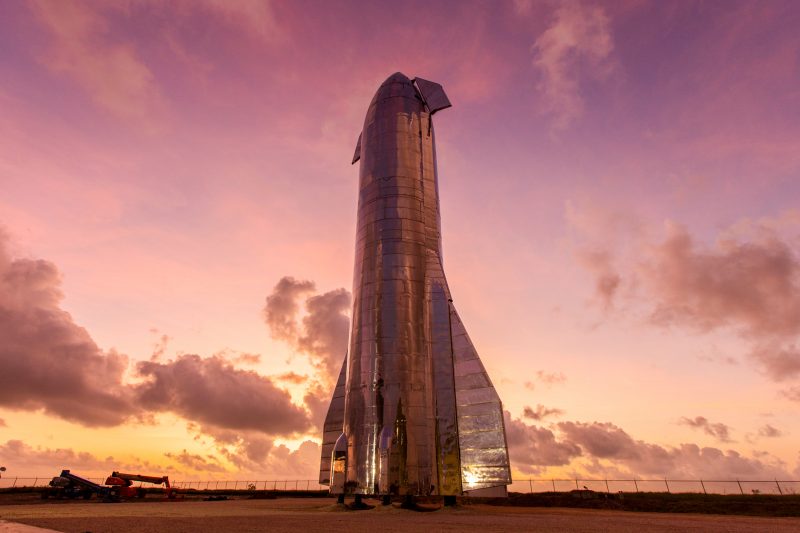 Foto: Starship serial No. 1, or SN1, in Boca Chica, Texas.sourceSpaceX

On Monday, Musk shared another photo of progress on Starship SN1, which showed the ship’s huge dome. The image showed geodesic dome welded to a shiny circular band of steel. Many other bands of steel welded together will make up the Starship’s tube-shaped body.

When a fan asked Musk what would move Starship’s winglike flaps, Musk tweeted that several Plaid electric motors – the strongest manufactured by Tesla, the car company of which Musk is CEO – would do the work.

„Simpler, lighter & more fault tolerant. Rear flaps each need ~1.5 megawatts,“ Musk added, referring to an amount of power that about 1,500 window air conditioners might consume at once. „It’s like moving the entire wing of an aircraft!“

SpaceX also plans to build a 22-story rocket booster called Super Heavy for its new launch system. During launch, a Starship spaceship would ride atop a booster in a stack about 387 feet (118 meters) tall, disconnect after the booster runs low on fuel, and rocket its way into orbit.

The whole Starship system, if realized, would be the most powerful launcher ever created; each launch would pack enough thrust to haul about 100 tons (about seven fully loaded school buses‘ worth of mass) and 100 people into orbit at a time.

What’s more, both parts are being designed to be fully reusable many times with little to no repair. If it works and costs about $5 million per launch, as Musk has previously intimated, the scheme could lower the cost of launching people and cargo into space by 10 to 100 times.

Musk said in September that he hoped to launch a Starship into orbit by mid-2020 and maybe even fly a person before the end of that year. Gwynne Shotwell, the president and chief operating officer of SpaceX, said during a recent NASA teleconference that „we are aiming to be able to drop Starship on the lunar surface in 2022“ and fly Maezawa around the moon in 2023.

However, both SpaceX leaders made these statements before the first Starship prototype’s bursting. The company will also have to clear several regulatory and practical hurdles – including the existence of a hamlet called Boca Chica Village within 1.5 miles of its launch pad – before it can launch any prototypes to orbit from South Texas.