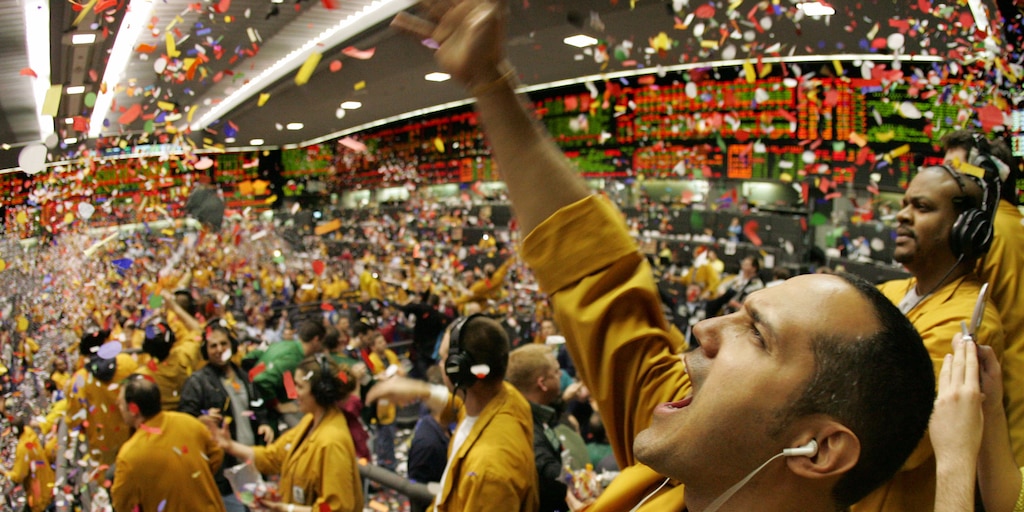 US stocks rose on Tuesday, rebounding from a more than three-year low on Monday, as investors anxiously awaited a sweeping coronavirus economic relief package that’s in its final stages of approval.

Early gains extended mid-morning on Tuesday when House Speaker Nancy Pelosi said on a call with CNBC that there was “real optimism” that a deal could be reached in the next few hours.

Later, Senate Majority Leader Chuck Schumer said that talks were on the 2-yard-line. Major indexes surged to session highs in the final 30 minutes of trading.

Here’s where the major US indexes stood at the market close on Tuesday:

“It’s pretty likely that we do see some kind of deal coming this week” as policy makers understand how urgent it is, Seema Shah, chief strategist at Principal Global Investors, told Business Insider in an interview. Until there is a clear announcement from the government, markets are likely to struggle to hold onto any gains, Shah said.Â

The Washington Post reported early Tuesday that majority leaders were nearing a deal on a $2 trillion coronavirus rescue package after multiple failed attempts to get one through Congress. Treasury Secretary Steven Mnuchin and Senate Minority Leader Chuck Schumer were optimistic that a deal could be reached soon, the report said.

On Monday, stocks slumped when leaders were unable to agree on a deal to curb the economic fallout from the coronavirus pandemic. Pressure has mounted as many states impose lockdowns to curb the spread of COVID-19, the illness caused by the virus.

Tuesday’s rally came after unprecedented actions announced on Monday by the Federal Reserve to aid the economy amid the outbreak, including unlimited bond-buying and help for local governments and companies. But the outbreak has already had an impact- US economic activity in March fell the most since 2009, data released Tuesday show.Â

Read more: JPMorgan reveals the 6 issues that will shape the endgame scenario for coronavirus as it derails the financial system – and shares what investors should be prepared for

Going forward, the details of the stimulus package and the targeted help it offers will be extremely important, according to Shah. If the plan focuses on keeping workers employed, “it’s going to change the outlook pretty significantly and markets are going to like that,” Shah said.Â

There’s also likely to be volatility in markets until the number of cases of COVID-19 peaks in the US, Jeff Kleintop, chief global investment strategist at Charles Schwab, told Business Insider.Â

The stimulus package – designed to keep mass layoffs and bankruptcies from happening while the US grapples with the outbreak- is “really just a bridge” until then, he said. It isn’t going to bring the economy around, “it just keeps a bad problem from getting worse in the near term,” said Kleintop.Â

Oil might be a better indicator of the economic backdrop as opposed to investor sentiment, according to Kleintop. The commodity gained early in the day but pared losses as a glut of supply and weakening demand due to the coronavirus pandemic outweighed efforts by the US government to boost the economy.Â

The US dollar weakened against other currencies in developed and emerging Tuesday, a good sign that the Fed is getting ahead of the dollar shortage, according to Kleintop.Â Gold, the safe-haven asset, also surged Tuesday after a recent drop.Â

“Bottom line, this market has been utterly dangerous since February,” Thomas Lee of Fundstrat wrote in a Tuesday note. “But there are glimmers of hope.”