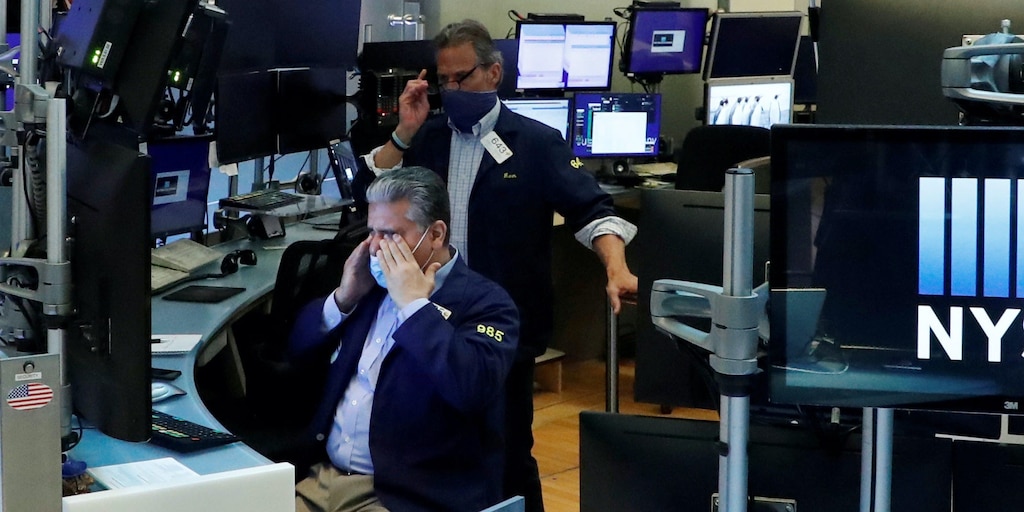 US stocks tumbled on Monday as investors continued to reckon with the likelihood of a second wave of coronavirus cases.

Nearly half of the 50 US states are seeing a rebound in infections as reopenings continue. North Carolina and Texas reported record hospitalizations on Saturday, while Florida, California, and Alabama post sharp increases in daily cases.

Economic data out of China signaled that, even as outbreaks are contained and consumer spending improves, the V-shaped rebound sought by investors isn’t likely to materialize.

Here’s where US indexes stood shortly after the 9:30 p.m. ET market open on Monday:

Read more: GOLDMAN SACHS: Buy these 9 dirt-cheap stocks now before their share prices catch up to their strong earnings upside

The decline in equities comes just two sessions after major US indexes suffered their worst single-day decline since March.

Popular bankruptcy-play Hertz slid after the car-rental chain filed to sell $500 million in stock. The struggling firm has seen violent price swings through recent sessions as retail investors bet on a miraculous recovery from severe indebtedness. The new stock offering gives Hertz a preferable fundraising option, though the company warned investors the shares “could ultimately be worthless” if it goes under.

Read more: Famed short-seller Andrew breaks down why he’s betting against these 4 companies – including Hertz and Tesla competitor Nikola

Oil continued to slide as hopes for soaring demand gave way to renewed virus risks. West Texas Intermediate crude declined as much as 5.2%, to $34.36 per barrel. International standard Brent crude slumped 3.9%, to $37.24 per barrel, at intraday lows.

Despite rising case counts throughout the US, Morgan Stanley economists doubled-down on their bet for a V-shaped recovery in a Sunday note. The firm told clients it expects global gross domestic product to rebound to pre-pandemic levels by the end of the year. Even if a second wave of cases threatens the recovery, the bank’s base-case sees “selective lockdowns” keeping the world economy from plunging further into recession.

Monday’s slide follows a modest increase to close out last week. Friday saw all three major indexes trend higher to retrace some of Thursday’s losses. The University of Michigan’s consumer sentiment survey showed optimism jumping the most since 2016 in June as positive rehiring figures boosted hopes for a labor-market recovery.