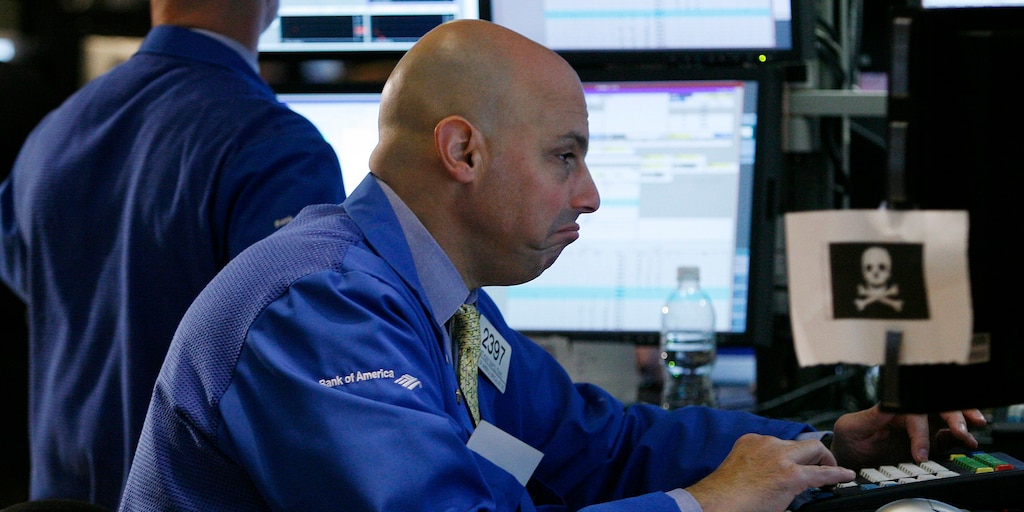 US stocks slipped on Wednesday as dire quarterly reports pointed to a larger-than-expected hit to corporate profits amid the coronavirus pandemic.

Goldman Sachs and Citigroup saw earnings tumble 46% in the first quarter, with both missing consensus analyst forecasts. Bank of America reported a profit decline of 45% and a $3.6 billion spike in loan-loss reserves. All three’s stocks traded sharply lower at the open.

Retail-sales data released Wednesday morning left investors with a bleak sign of the outbreak’s hit to consumer spending. The Commerce Department announced that sales plummeted 8.7% in March, the biggest drop since the department began tracking the data in 1992. Economists surveyed by Reuters had expected sales to dip by 8%.

Here’s where major US indexes stood at the 4 p.m. ET market close on Wednesday:

“What we are starting to see is actual meat on the bones of the economic numbers,” Liz Ann Sonders, chief investment strategist at Charles Schwab, said in an interview with Business Insider. “Up until very recently, everybody was just in a position of speculating how bad the numbers were going to be.”

Data detailing US factory activity flashed yet another warning sign. Manufacturing output slid by 6.3% in March, the most since 1946, as the virus lockdown stifled demand and operating efficiency.

“The outlook is bleak for the industrial sectors,” Oxford Economics said in a Wednesday note. “With the Global Coronavirus Recession leading to a sudden stop in activity at home and around the world, factory output is likely to fall even further in April.”

Read more: 450 flips with no prior experience: Here’s the 3-part real-estate-investing strategy a former Microsoft engineer is using to generate ‘piles of cash’ in a market that’s nearing recession

In the commodity market, WTI crude oil tanked as much as 5%, to $19.20 per barrel, after the International Energy Agency said the coronavirus pandemic would prompt a record decline in global oil demand through the year. The agency’s projection came after OPEC agreed on Sunday to a global production cut of 9.7 million barrels per day in an effort to prop up demand.

Wednesday’s decline nearly placed stocks back at lows seen earlier in the week. The previous session pushed the Dow 559 points higher as signs that the coronavirus’ spread was slowing drove fresh optimism. President Donald Trump on Monday indicated he’d like to open the economy “ahead of schedule,” though the White House is likely to butt heads with governors on that timing.

As economists and politicians begin to map what a return to economic norms would look like, banks are preparing for near-term turbulence. The five firms to announce earnings so far collectively shored up more than $19 billion in loan-loss reserves, protecting against a spate of defaults likely to arrive amid the virus recession. The lending giants may pad their reserves even further if the situation worsens.

“When we get to the end of the second quarter, we may have a different view of the future,” Paul Donofrio, chief financial officer at Bank of America, said in an earnings call.

Read more: A Wall Street strategy chief lays out 8 stock trades that can give investors an extra jolt of returns as the post-coronavirus rally enters a new phase