The coronavirus outbreak is devastating tourism across Asia, and these images prove it.

The problem is twofold: Attractions within China are either shut or heavily restricted, and also Chinese tourists on lockdown are no longer flying abroad.

These pairs of before-and-after photos show how individual landmarks have been left looking like ghost towns by an outbreak that has paralyzed large parts of a continent.

BEFORE: The Forbidden City in Beijing is one of the most visited sites in the world. 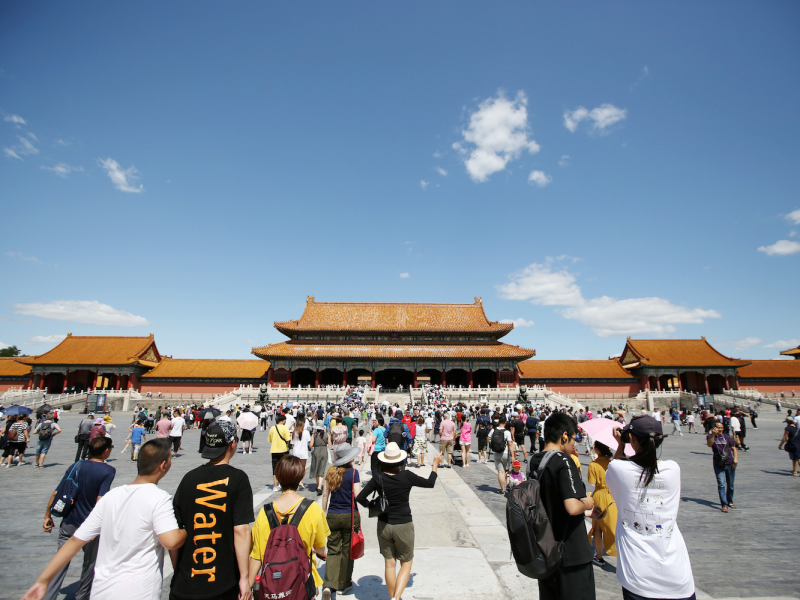 Beijing has been experiencing a rise in tourist numbers, with more than 4 million arrivals in 2018, according to China Daily.

AFTER: The attraction was closed indefinitely to tourists at the end of January. Photos show a couple of people milling about by the entrance. 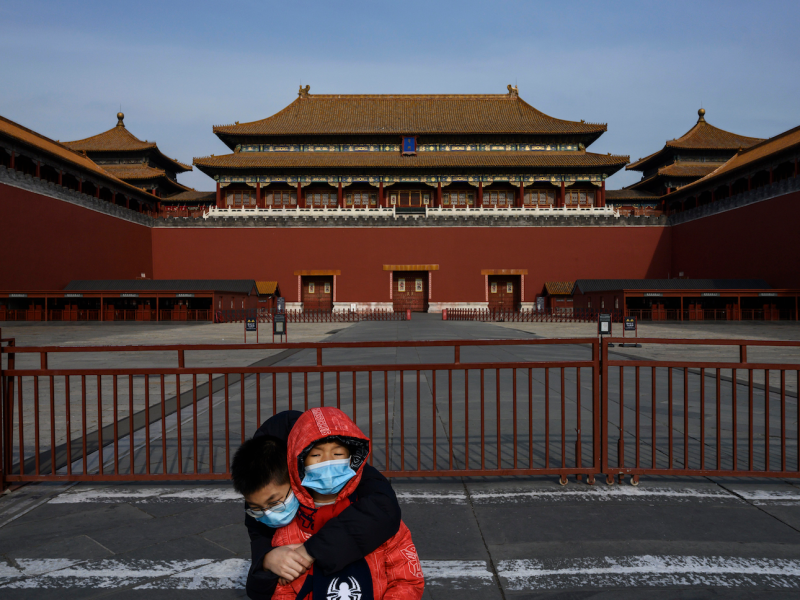 Foto: The gated entrance to the Forbidden City on January 24.sourceGetty

The reopening of the museum is pending further notice, according to Reuters.

BEFORE: The Temple of Heaven, a 15th-century religious center recognized by UNESCO, is another must-see Beijing attraction. 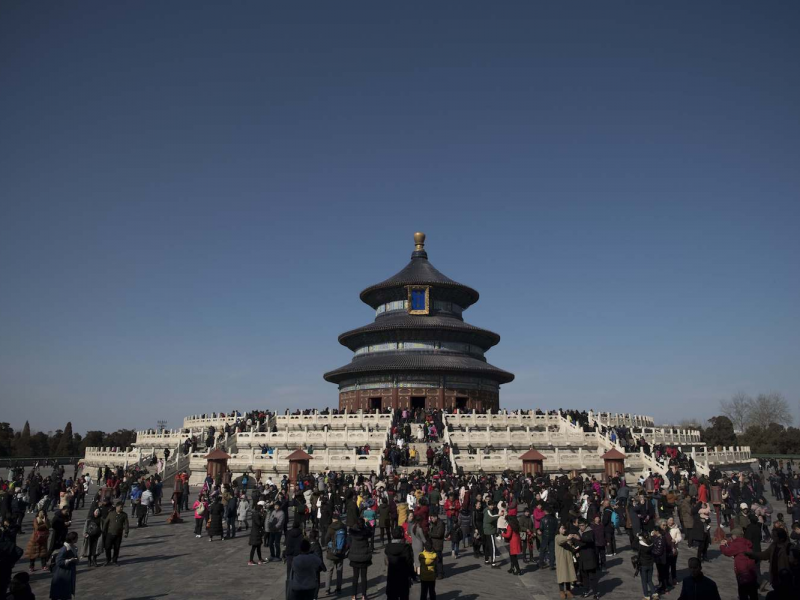 Foto: The Temple of Heaven during the Lunar New Year holidays in Beijing on February 20, 2018.sourceGetty

AFTER: The attraction is still open, but numbers are way down. 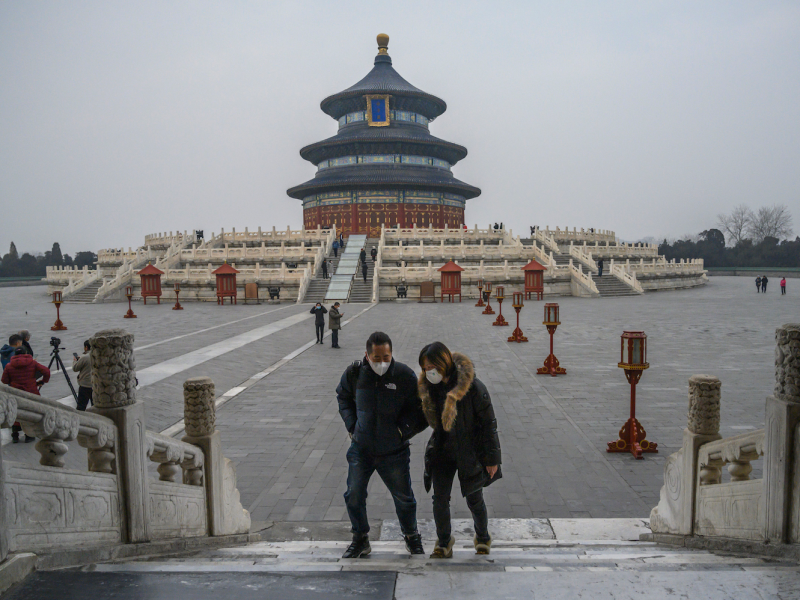 Foto: Visitors wore protective masks at the Temple of Heaven on January 27.sourceGetty

While the Temple of Heaven remains open to tourists, authorities closed down other Bejing hotspots, like the Ming Tombs and the Yinshan Pagoda, on January 24.

BEFORE: The Great Wall of China is one of the most famous landmarks in the world. 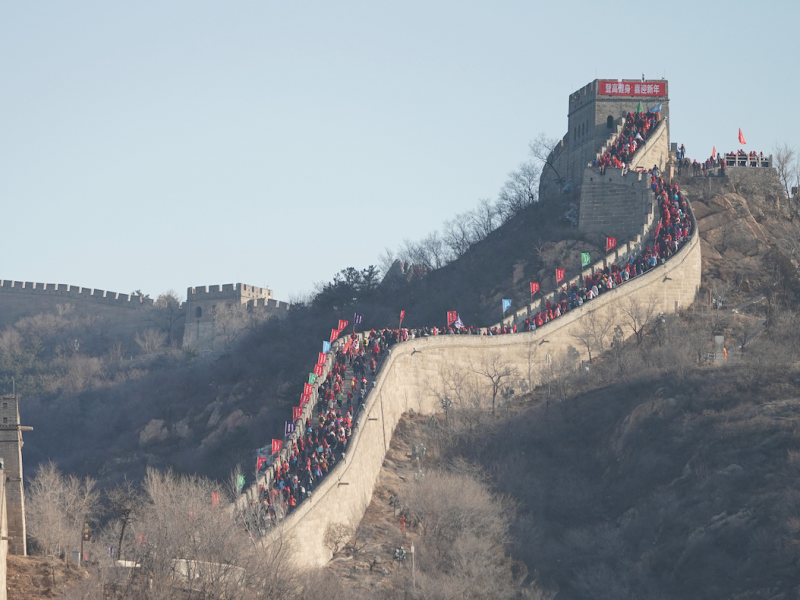 In 2019, officials had to cap visits at 65,000 a day because the Wall was overcrowded with local and international tourists.

AFTER: Parts of The Great Wall have been closed to the public. It looks very different. 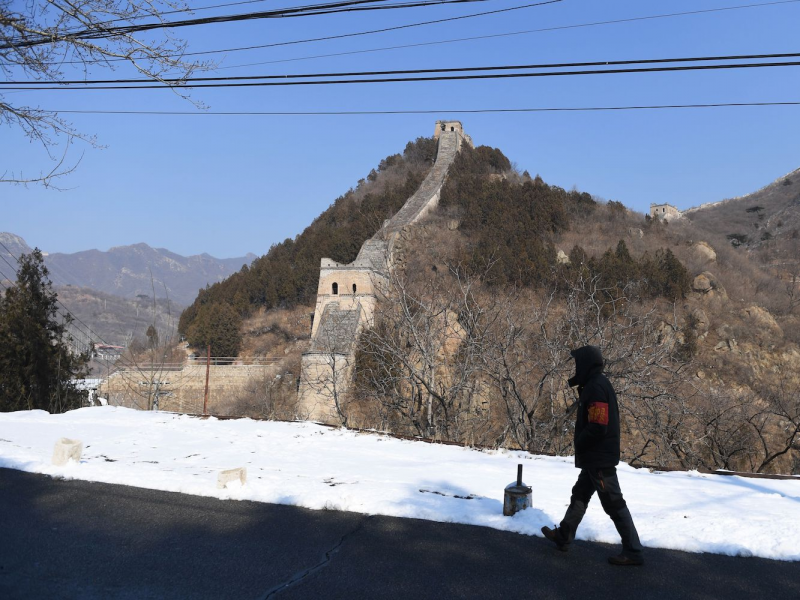 Foto: A security guard near a closed section of the Great Wall of China on February 7.sourceGetty

In a bid to limit the spread of the virus, authorities announced on January 25 that the Badaling section of the Great Wall of China would temporarily close.

Tourists visiting other sections of the Wall will have their temperature checked, according to Channel News Asia.

BEFORE: Shanghai Disneyland, which opened in 2016, attracted 11 million people in its debut year. 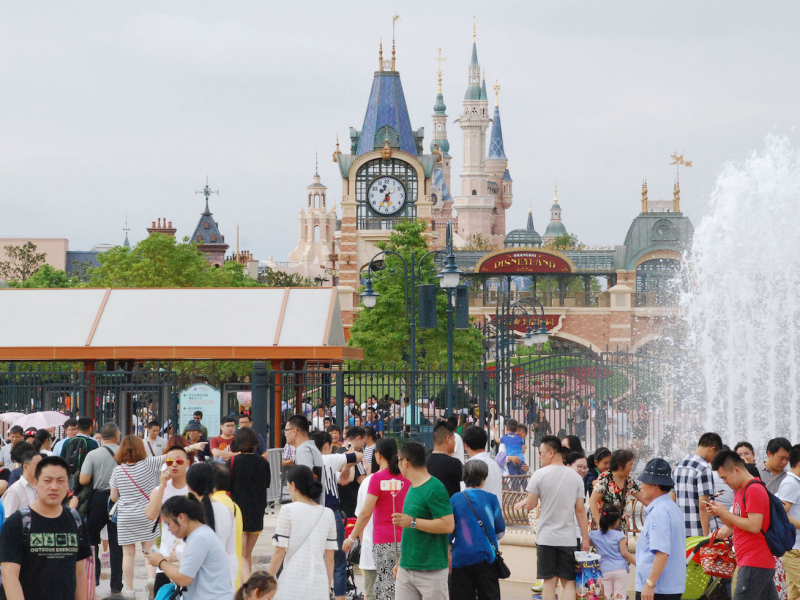 The Disney theme park, which cost $5.5 billion, was the first of its kind in mainland China.

AFTER: On January 25, officials announced they would be closing the theme park indefinitely. 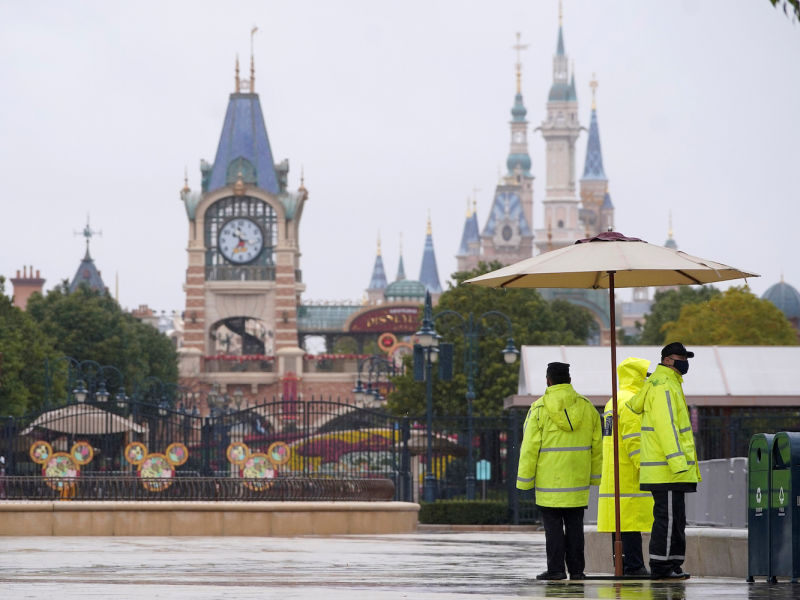 BEFORE: Macau, the world’s biggest gambling hub, welcomed 35.8 million visitors in 2018, according to Statista. 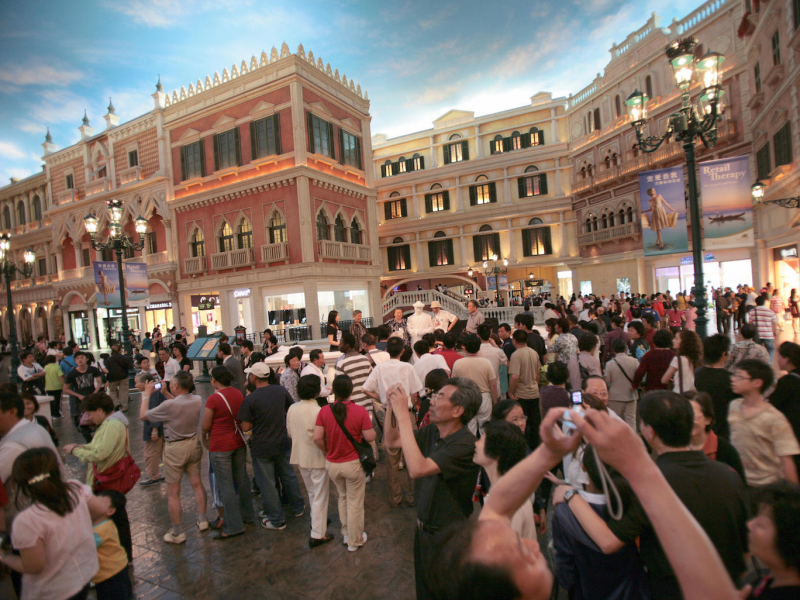 Foto: Tourists in „Piazza San Marco“ of the Venetian casino on May 9, 2008, in Macau.sourceGetty

Known as the „Vegas of China,“ Macau has been attracting casino enthusiasts since gambling became legal in the 1960s.

AFTER: Macau closed its casinos for two weeks after 10 people tested positive for the coronavirus on February 4. They are now open again, but everybody has to wear a mask. 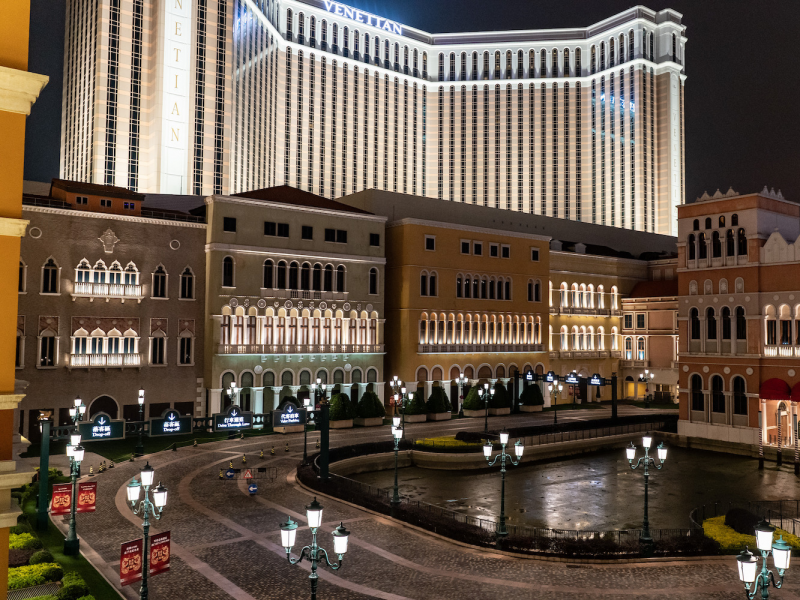 Foto: The Venetian Macau on February 5 during a general closing of the city’s casinos.sourceGetty

During the closings, authorities said, the city was receiving about 2,000 visitors a day, a drop of 98% year-on-year.

A handful of Asian cities outside China are also struggling with the dwindling numbers of tourists. 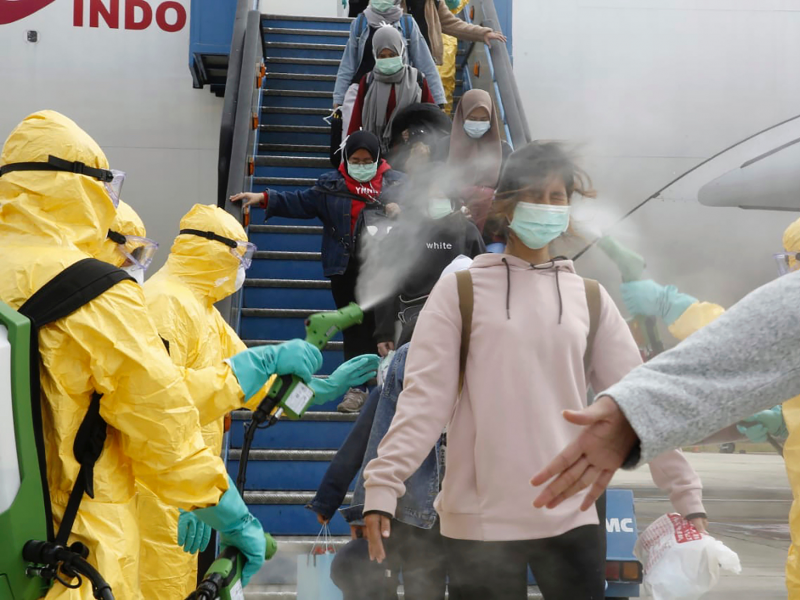 Foto: Indonesians arriving from Wuhan, China, were sprayed with antiseptic at Hang Nadim Airport in the city of Batam on February 2.sourceIndonesian Foreign Ministry via AP

BEFORE: The Ratchada Train Night Market in Bangkok is usually teeming with people. 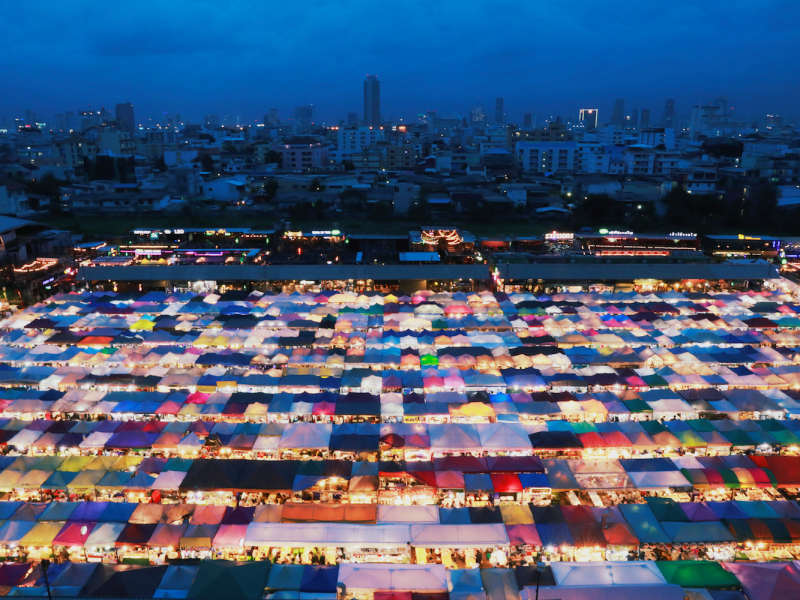 Foto: A general view of the market in Bangkok on August 23, 2018.sourceReuters

Last year, 11 million Chinese visitors traveled to Thailand, but this number is expected to drop by 2 million this year, according to The Guardian.

AFTER: The market is still open, but visitor numbers are down sharply. 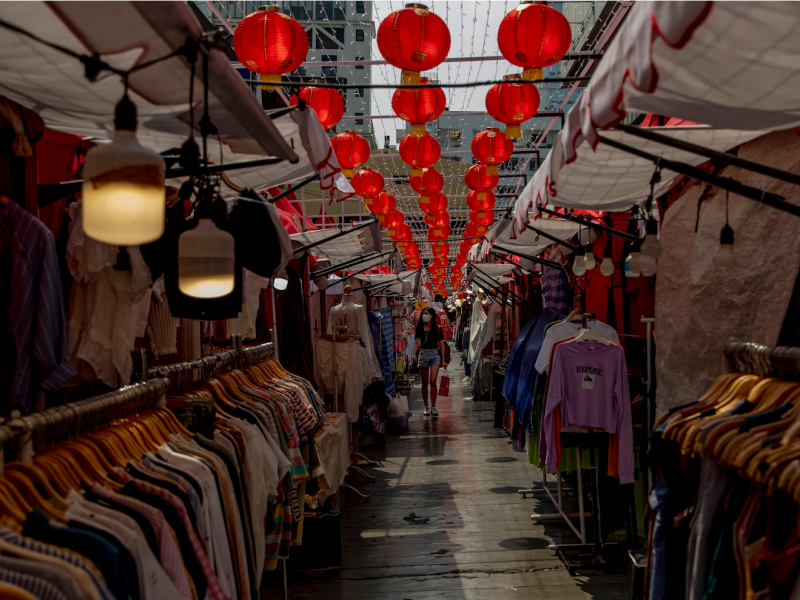 Foto: A shopper at the Ratchada market on January 29.sourceAP

A market stall owner told The Guardian that his best-selling items had come to include disposable face masks, which surpassed sales of souvenirs such as pad-Thai fridge magnets.

With so few visitors, vendors say they are struggling to make ends meet.

BEFORE: The Literature Temple in Hanoi, Vietnam, is often cited as one of the city’s most picturesque tourist attractions. 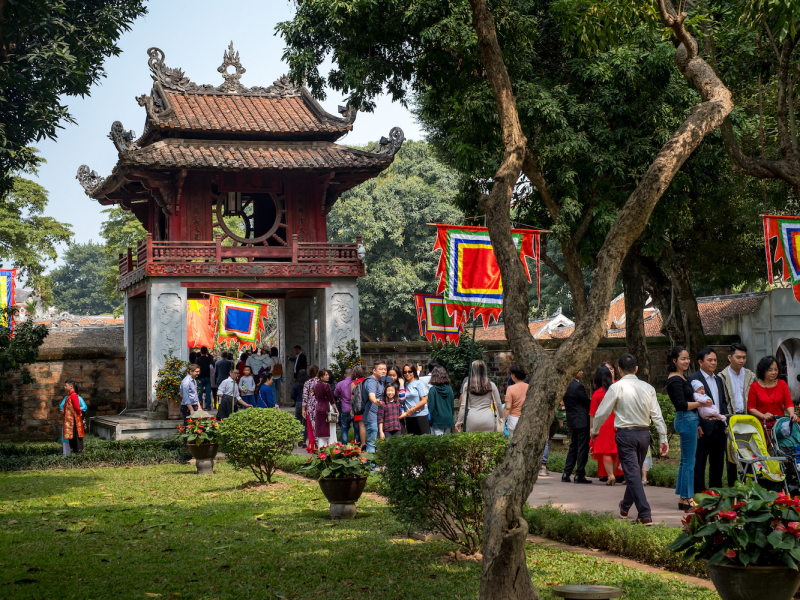 Foto: The Van Mieu — or Literature Temple — on February 5, 2019, the first day of the Lunar New Year.sourceGetty

The coronavirus outbreak has had a big impact on Vietnam, which counts China as its largest trading partner.

AFTER: Here is the temple this year. Everyone has a face mask. 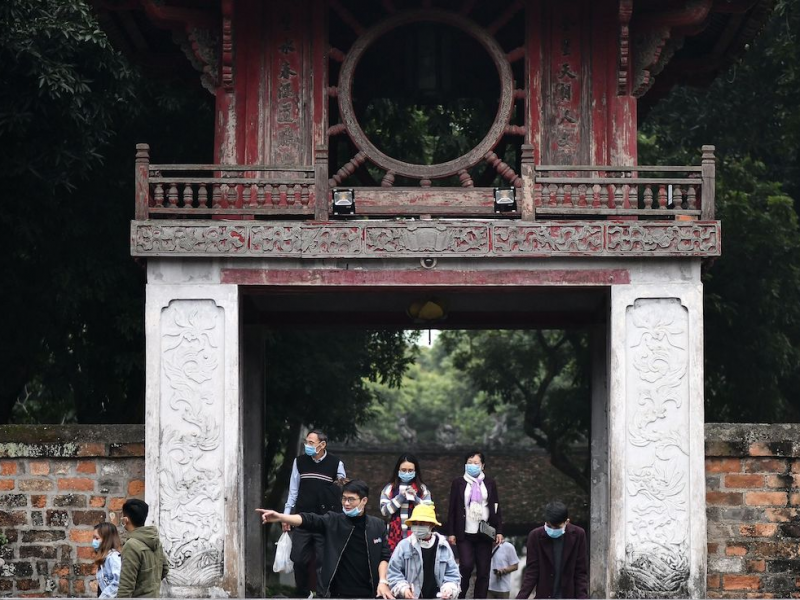 Foto: Tourists at the Temple of Literature in Hanoi on February 12.sourceGetty.

On her trip to Ho Chi Minh City in Vietnam, Business Insider’s Kate Taylor noticed that most people in the city were wearing surgical masks and that „if you aren’t wearing a mask, you are seen as potentially part of the problem.“

BEFORE: Here is the Hoh Chi Minh mausoleum in Hanoi, a landmark that’s often used for large state ceremonies. 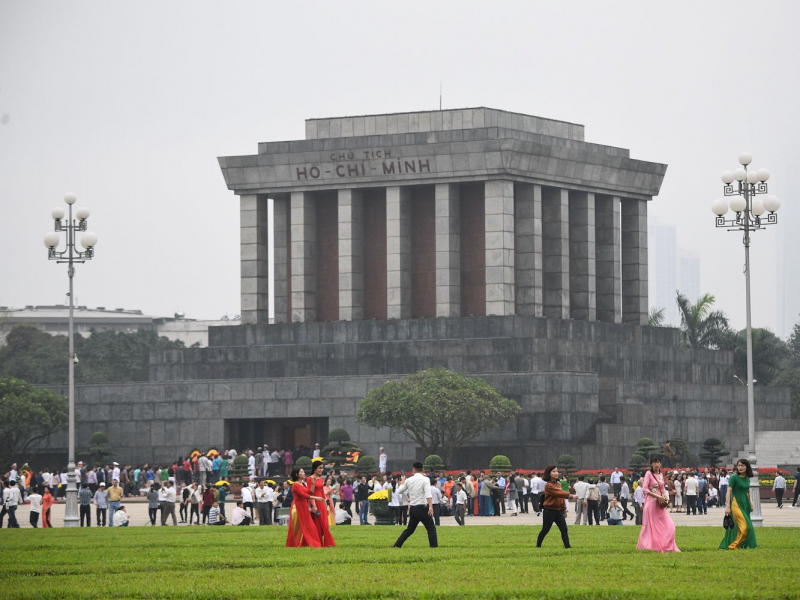 Vietnam had a total of 1.5 million tourists visiting its cities in 2019, according to Vietnam Tourism. A third of them came from China.

AFTER: These tourists, all with face masks, don’t have much company in a photo taken one week ago. 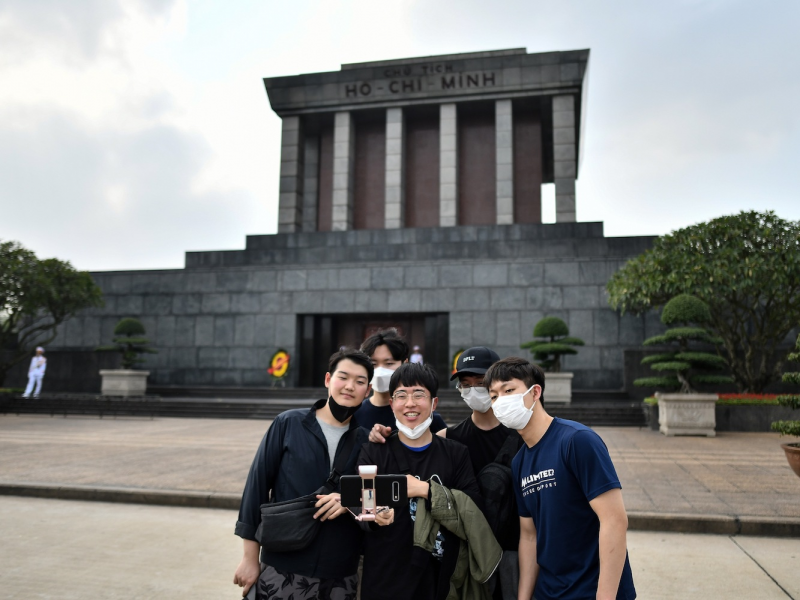 Foto: Tourists take a selfie outside the Ho Chi Minh mausoleum in Hanoi on February 11, 2020.sourceGetty

Tour operators in large cities like Ho Chi Minh and Ha Long have been receiving about 50% fewer customers, according to Vietnam Insider. Hotels and resorts are also affected, suffering a 20 – 50% decline in occupancy.

BEFORE: Over the years, South Korea has seen a surge in visitor numbers, with almost 15.5 million in 2018. Gyeongbokgung Palace is one of its top attractions. 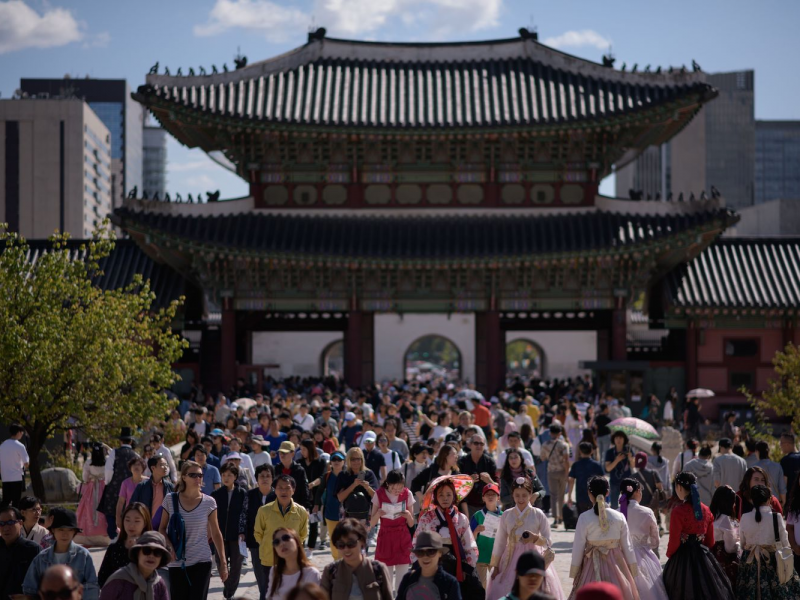 Due to its proximity to China, a large proportion of its tourists come from there. Almost 4.8 million Chinese visitors traveled to South Korea in 2018, according to the Korean Tourism Organization.

AFTER: This picture, taken February 10, shows quieter scenes in front of the Gyeongbokgung Palace. 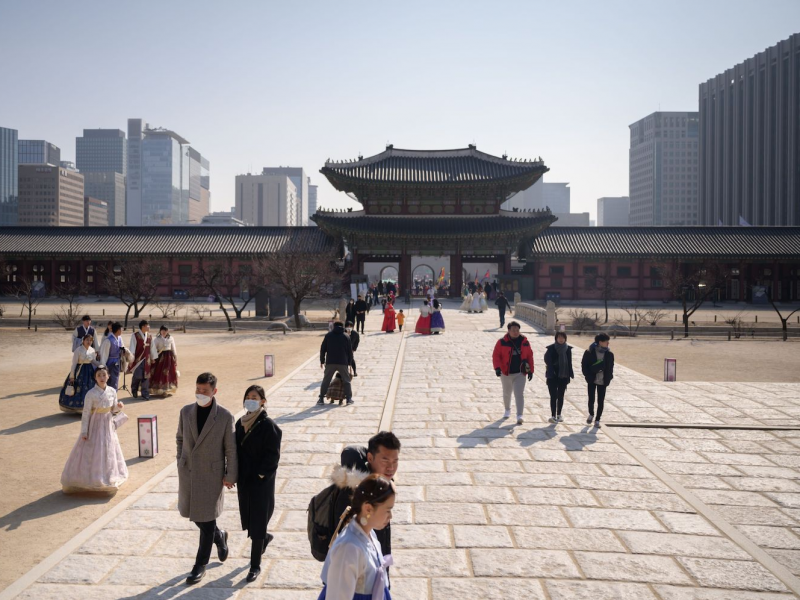 On February 19, South Korea saw its coronavirus cases jump by half, raising its total from 31 to 46, the Korea Centers for Disease Control and Prevention (KCDC) said in a statement cited in The Japan Times.

BEFORE: Tokyo, Japan, is one of the biggest cities in Asia, and a big draw for tourists. 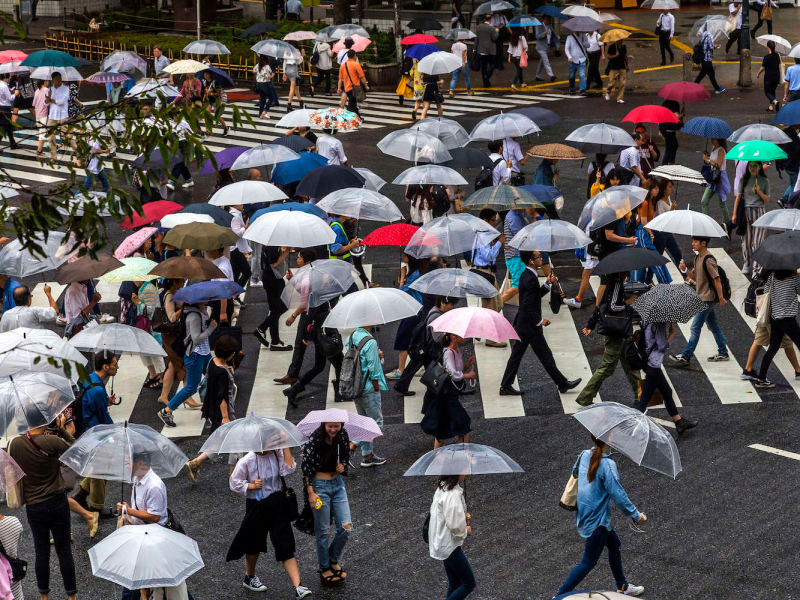 On average, half a million people use the famous Shibuya Crossing every day and 3,000 per crossing cycle, according to Associated Press.

AFTER: This image shows the crossing basically deserted. 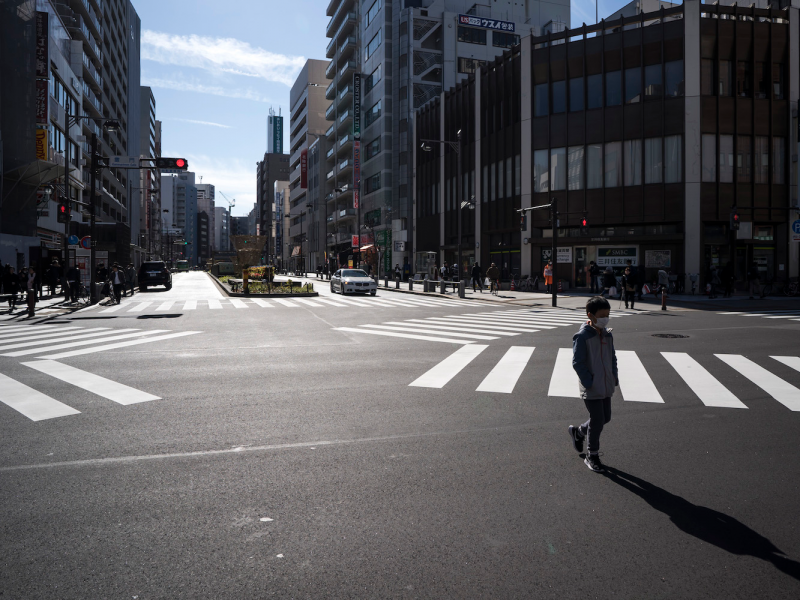 Foto: A boy wearing a mask at the Shibuya crossing on February 02, 2020, in Tokyo, Japan.sourceGetty

As of February 17, there were a total number of 59 confirmed cases of coronavirus in Japan.

The country made headlines when a large cruise ship called the Diamond Princess, had to be put in quarantine after an outbreak of the virus on board.

The common concern among all these countries is how long the virus will last, as they are already feeling the burden of a slowing tourist industry, according to the Financial Times. 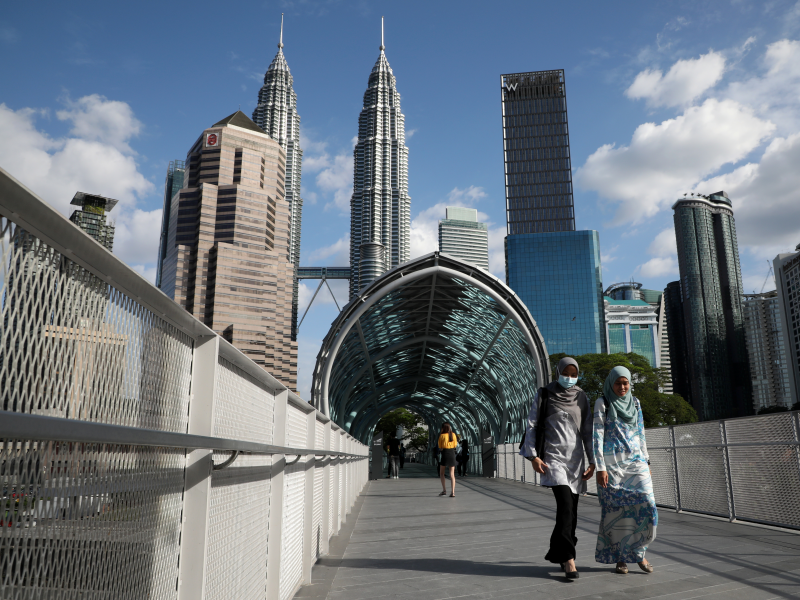 Foto: A woman wearing a protective face mask crosses a bridge, following the outbreak of the coronavirus in China, in Kuala LumpursourceReuters

As the number of coronavirus cases increases, countries across the world are becoming increasingly worried about what this means for their tourism sectors and the overall economy.