Sen. Bernie Sanders was projected to win the New Hampshire primary on Tuesday night with 26% of the vote as of 11 pm ET.

He was followed by former Mayor Pete Buttigieg with about 24% of the vote and Sen. Amy Klobuchar with 20% of the vote.

See the full results of the New Hampshire Democratic primary

Polling in the days leading up to the primary showed Sanders with a lead over Buttigieg somewhere between one and seven percent. But Buttigieg gained on Sanders in the weeks prior to the primary, cutting into former Vice President Joe Biden’s support.

Sanders has long had strong support in New Hampshire, which neighbors his home state of Vermont, and he swept the state’s 2016 primary with 60% of the vote to Hillary Clinton’s 38%.

But the CNN poll also found that almost half of New Hampshire voters hadn’t made up their mind on who they’d vote for just days before the primary.

This comes shortly after the chaos of the Iowa caucuses, where Buttigieg and Sanders remain neck-and-neck as recanvassing takes place. 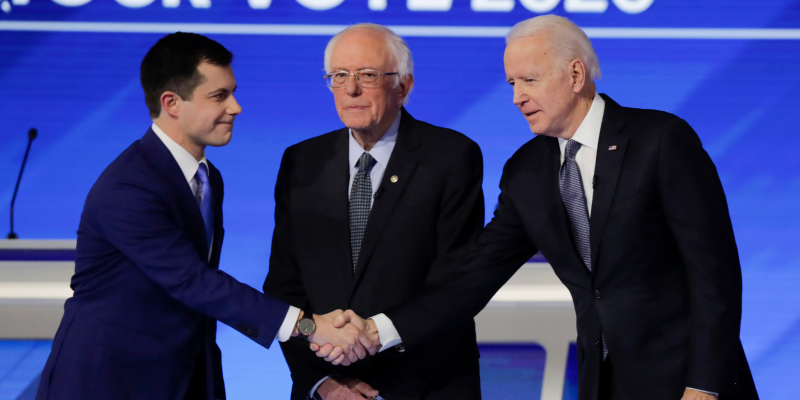 The New Hampshire primary accounts for just 24 – or 0.6% of the total – pledged delegates, but it often signals the end of some of candidates‘ campaigns.

Sanders‘ win on Tuesday gives him early momentum in the race and has made him the new frontrunner as he simultaneously took the lead for the first time in a national Quinnipiac poll on Monday.

The candidates‘ attacks on each other escalated sharply during the days between the Iowa caucus and the New Hampshire race.

At a Democratic debate in Manchester, New Hampshire, on Friday, several candidates, including Sens. Elizabeth Warren and Amy Klobuchar, took pointed shots at Buttigieg, accusing the former mayor of being compromised by donations from billionaires, lacking experience for the job of president, and not owning up to his record on race relations in South Bend.

Biden released an ad on Saturday mocking Buttigieg’s record as mayor and comparing his accomplishments in the Senate and in the Obama White House with the Midwesterner’s less broadly impactful achievements. The former vice president has repeatedly warned that nominating Sanders would alienate moderates and independents who are repelled by the senator’s democratic socialism.