Australia has become an inferno.

Since the start of the country’s bushfire season in September, 14.6 million acres have burned and at least 18 people have died. Half a billion animals have perished, and the country’s eastern states and biggest cities have been hammered by smoke and walls of flame. An estimated 1,400 homes have been destroyed in New South Wales, with hundreds of thousands of people forced to evacuate.

Australia experiences fires every fall, but this year’s crisis – which comes on the heels of a record-breaking heatwave and prolonged drought – is unprecedented. The fires that plagued the Brazilian Amazon over the summer, by comparison, burned through 7 million acres of rainforest, about half of the impacted area in Australia. 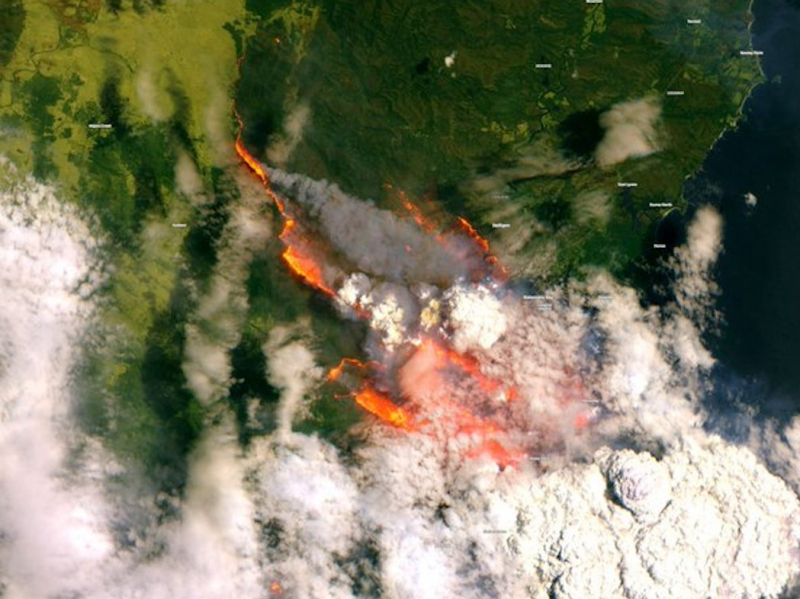 Foto: A satellite photo of Bateman Bay on the southern coast of New South Wales, Australia, on December 31, 2019.sourceCopernicus EMS

Whereas most of the Amazon fires were deliberately set by ranchers and loggers looking to clear land, Australia’s bushfires mostly started due to natural causes.

But they may be part of an ominous feedback loop. The more land burns, the more carbon dioxide (CO2) gets released into the atmosphere, and the more trees – which act as natural carbon sinks – disappear. Already, Australia’s fires have released 350 million metric tons of CO2 into the atmosphere. That’s roughly 1% of the total global carbon emissions from 2019. The more CO2 gets released, the warmer our planet gets; that raises the risk of more big and deadly fires.

An area twice the size of Belgium is burning 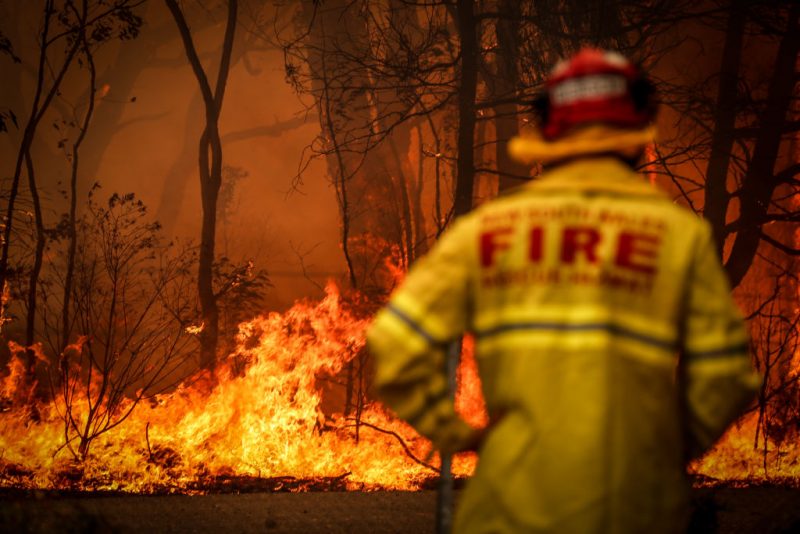 Foto: A fire fighter watches a bushfire as it burns near homes on the outskirts of the town of Bilpin on December 19, 2019 in Sydney, Australia.sourceDavid Gray/Getty Images

It’s hard to comprehend the size of the affected area in Australia. In total, the area of burned land (14.6 million acres) is twice the size of Belgium. Nearly six times more acres have burned in Australia than in California’s devastating 2018 wildfire season, when the Camp Fire destroyed the town of Paradise.

Melbourne and Sydney have been engulfed in smoke.

„I looked out into smoke-filled valleys, with only the faintest ghosts of distant ridges and peaks in the background,“ Michael Mann, a US climate scientist who is on sabbatical in Sydney, wrote in the Guardian on Wednesday. 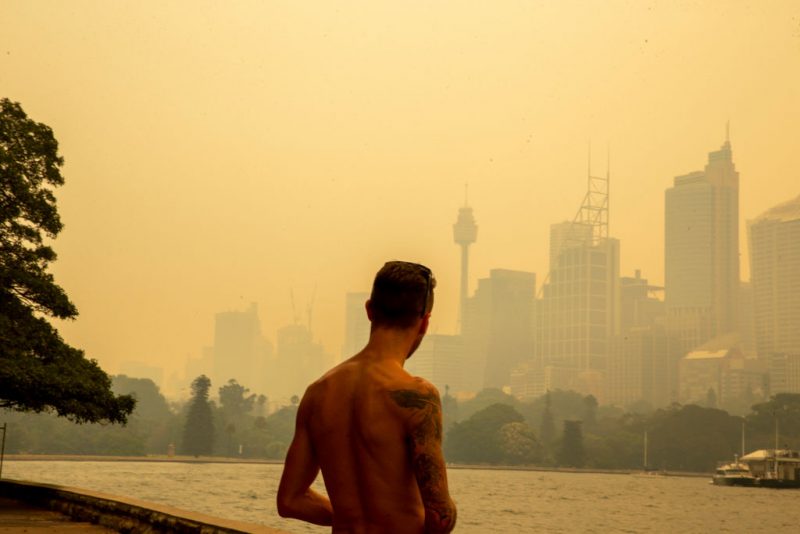 Foto: A man looks at the smoky skyline on December 19, 2019 in Sydney, Australia.sourceJenny Evans/Getty Images

In December, a state official said New South Wales was experiencing the „longest“ and „most widespread“ period of poor air quality in the state’s history.

According to AirVisual, a service that provides a live ranking of air quality in the world’s cities, Sydney had the 12th-worst air quality on the planet on December 11. 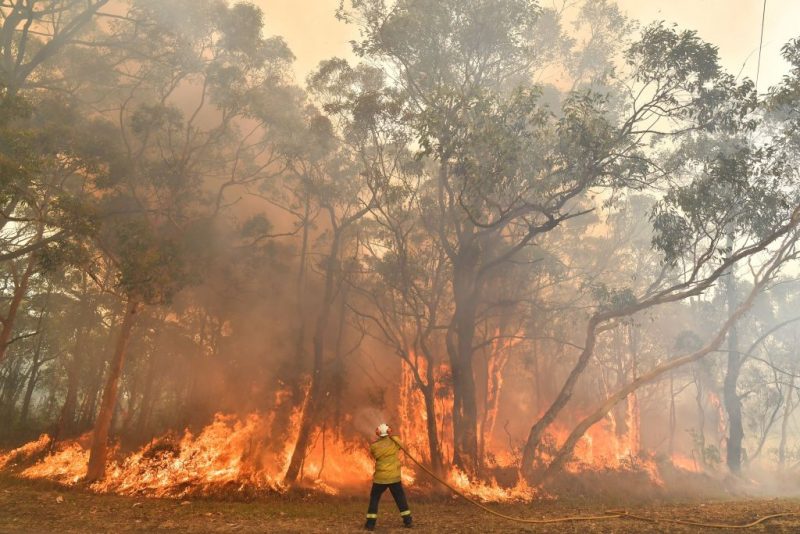 Dry conditions in Australia’s bushland, wooded areas, and Blue Mountain National Park have made the land ripe for sparks. Australia experienced its driest spring ever in 2019. December 18 was the hottest day in the country’s history, with average temperatures hitting 105.6 degrees Fahrenheit (40.9 degrees Celsius).

In the last 15 years, Australia saw eight of its 10 warmest years on record. Winter rains, which can help reduce the intensity of summer fires, have declined significantly, The Sydney Morning Herald reported. That meant that when the fire season started, it was savage and unstoppable.

„We used to see hundreds of thousands of hectares burned in bushfires, but now we are seeing millions on fire,“ Pep Canadell, executive director of the Global Carbon Project, told the Herald. 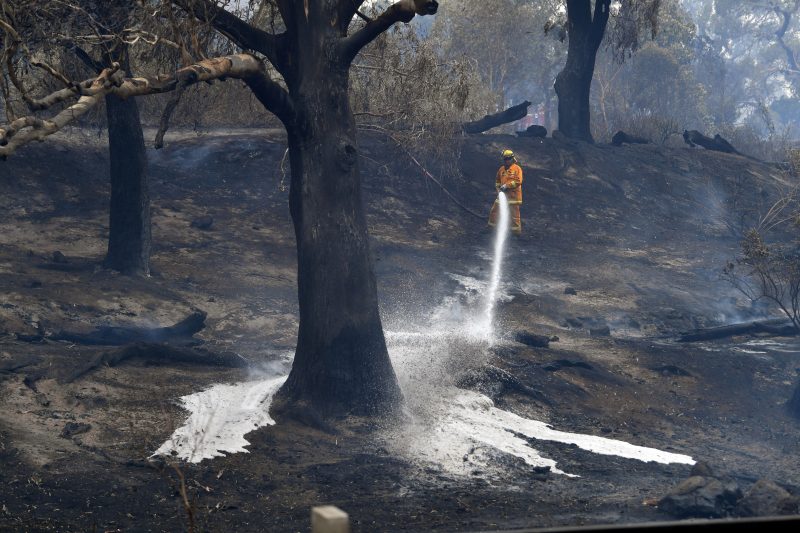 The more forests burn, the more carbon dioxide enters the atmosphere, and the more heat it traps on the planet. To make matters worse, when natural carbon sinks like the Amazon rainforest and woodlands in Australia burn down, that reduces the natural avenues by which CO2 can get absorbed.

In 2019, wildfires across the globe released approximately 6.38 billion tons of carbon dioxide into the atmosphere, according to the European Union’s satellite observation program, Copernicus. That’s about 17% of the global total for the year.

Until now, Australia’s annual bushfires were pretty much net-zero in terms of greenhouse-gas emissions – the CO2 they emitted was balanced out by how much carbon-dioxide the country’s forests sequestered. But in the last three months, Australia’s fires have emitted roughly 350 million metric tons of CO2, according to the Herald. (By comparison, the Amazon fires produced less than half that: 140 million metric tons.)

Between 2013 and 2017, Australia’s fires emitted 340 million metric tons of CO2 on average per year. This year’s total has already blown past that, and Australia’s dry season has another two months to go.

„Normally bushfires are thought of as ‚carbon neutral,‘ but, in very simple terms, we’re seeing climate extremes carry a double punch, with more frequent fire and drought,“ David Bowman, a fire science expert at the University of Tasmania, told the Herald. 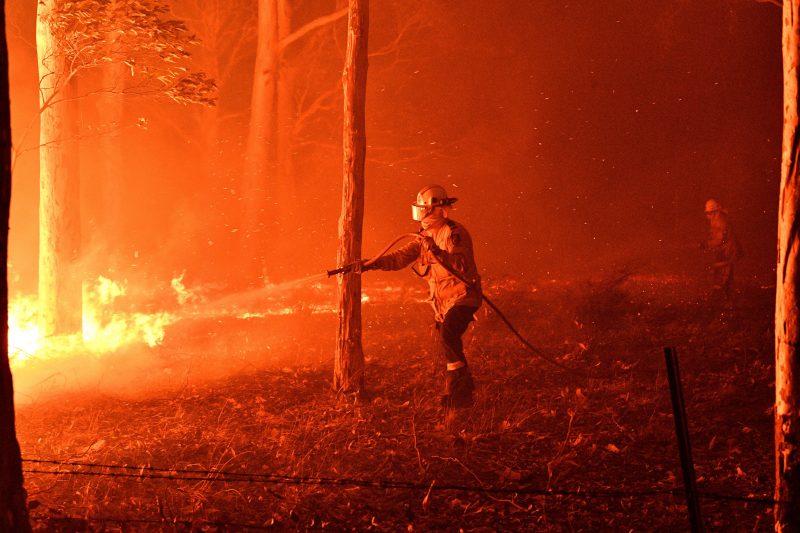 Foto: A firefighter hoses down trees and flying embers in an effort to secure nearby houses from bushfires near the town of Nowra in the Australian state of New South Wales, December 31, 2019.sourceSaeed Khan/AFP/Getty

Canadell said he thinks the country’s forests will need 100 years to return to the point where they can act as carbon sinks for fires of this size and scale.

Last year was a year of fire. Blazes cut through the Siberian tundra over the summer. California was hit by three dozen fires that each burned more than 1,000 acres. More than 100,000 fires started over the course of 10 August days in the Amazon rainforest. 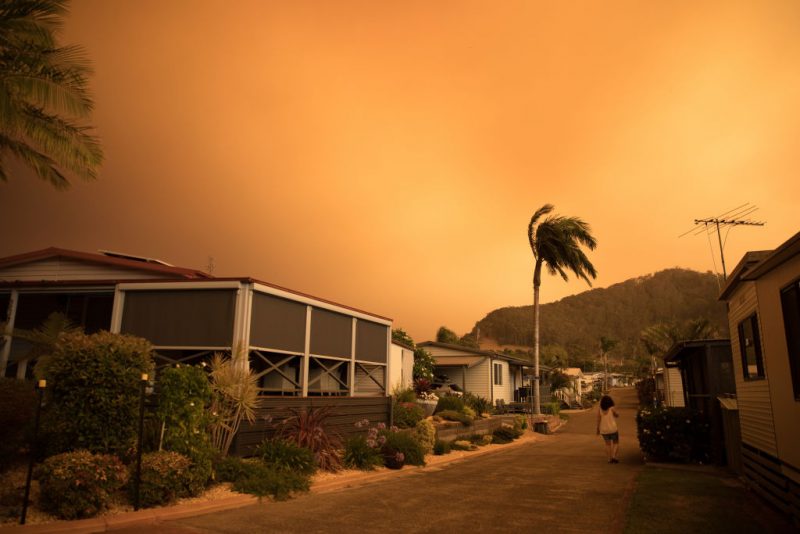 Foto: The sky is filled with smoke, and ash on December 21, 2019 in Shoalhaven Heads, NSW, Australia. A catastrophic fire danger warning has been issued for the greater Sydney region, the Illawarra and southern ranges as hot, windy conditions continue to hamper firefighting efforts across NSW. NSW Premier Gladys Berejiklian declared a state of emergency on Thursday, the second state of emergency declared in NSW since the start of the bushfire season.sourceCassie Spencer/Getty Images

„Climate change is exacerbating every risk factor for more frequent and intense bushfires,“ Dale Dominey-Howes, an expert on disaster risk at the University of Sydney, told Business Insider Australia. „Widespread drought conditions, higher than average temperatures – these are all made worse by climate change.“

Earth has already warmed about 1 degree Celsius. July 2019 was the hottest month ever recorded, and 2019 will likely be the third-hottest year on record globally, according to Climate Central. Only 2016, 2015, and 2017 were hotter (in that order). 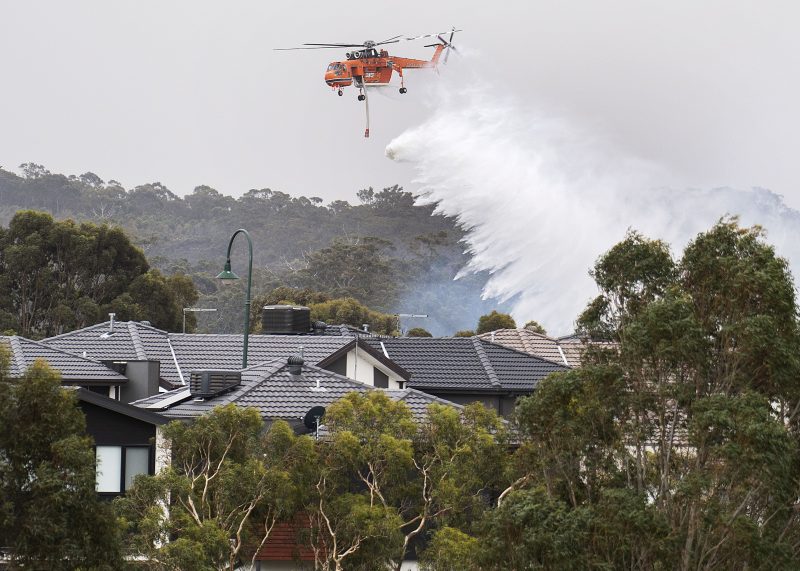 Foto: A helicopter drops water on a bushfire in scrub behind houses in Bundoora, Melbourne, Australia, December 30, 2019.sourceAAP Image/Ellen Smith via REUTERS

„The brown skies I observed in the Blue Mountains this week are a product of human-caused climate change,“ Mann wrote in The Guardian.

He added: „Take record heat, combine it with unprecedented drought in already dry regions, and you get unprecedented bushfires like the ones engulfing the Blue Mountains and spreading across the continent. It’s not complicated.“