The fight for privacy between Apple and the White House was reignited this week, when Attorney General Bill Barr publicly criticized Apple for not helping the FBI access a mass shooter’s cell phone.

Barr told reporters on Monday that Apple had given „no substantive assistance“ to an investigation into the shooting at a naval base in Pensacola, Florida, on December 6, 2019.

In that shooting, gunman Mohammed Alshamrani, a visiting officer in the Saudi Arabian air force, killed three people, wounded more, and was shot dead himself.

Barr in his conference declared the shooting an „act of terrorism,“ and said Alshamrani was motivated by jihadist ideology.

He said that the FBI asked Apple last week to help unlock two iPhones used by the shooter. According to the Wall Street Journal, Alshamrani shot the phones, leaving them badly damaged.

But Apple has refused the request, citing a longstanding policy not to compromise user privacy by breaking encryption.

The dispute is a close parallel to a stand-off between Apple and the Obama administration in 2015 in the wake of a mass shooting in San Bernardino, California. 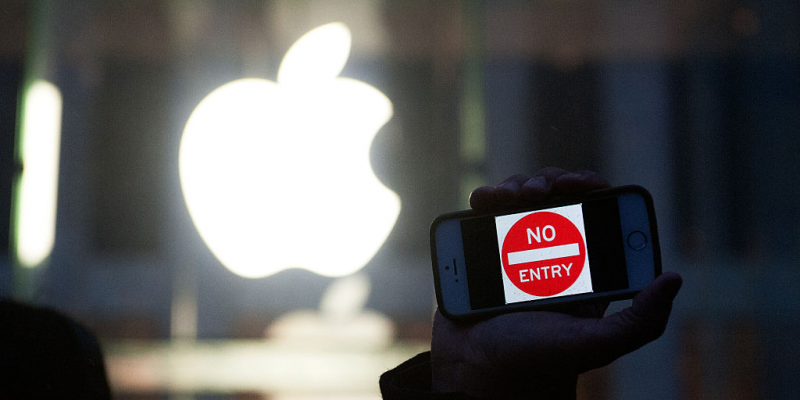 Foto: A protester holds up an iPhone that reads, „No Entry“ outside of the the Apple store on 5th Avenue on February 23, 2016 in New York City.sourceBryan Thomas/Getty Images

The San Bernardino shooting took place at a social-services agency and left 16 people dead, including the two shooters.

At the time, the FBI asked Apple to unlock the iPhone of gunman Syed Rizwan Farook. The agency said it couldn’t access the phone’s contents because he had a passcode, and asked Apple to build a „backdoor“ iOS operating system that could bypass iPhone security features.

A federal judge in California publicly ordered Apple to assist the FBI – but Apple refused, saying the measure would „threaten the security of our customers“ and had „implications far beyond the legal case at hand.“

Their refusal set the stage for a clash between the tech world and law enforcement over user privacy.

The FBI sued Apple for defying the court order, prompting protests around the country in support of Apple.

However, the clash ended inconclusively when the FBI dismissed its suit because it had found a way to unlock an iPhone without help from Apple.

Sen. Dianne Feinstein of California, a top Democrat on the Senate committee that oversees the FBI, later said publicly that the government paid $900,000 to an undisclosed party to unlock the phone.

But Melanie Newman, a spokeswoman for the Justice Department, told The New York Times in 2016 that the battle over access to digital data was not over.

„It remains a priority for the government to ensure that law enforcement can obtain crucial digital information to protect national security and public safety, either with cooperation from relevant parties, or through the court system when cooperation fails,“ she said.

The stage set for the battle to repeat 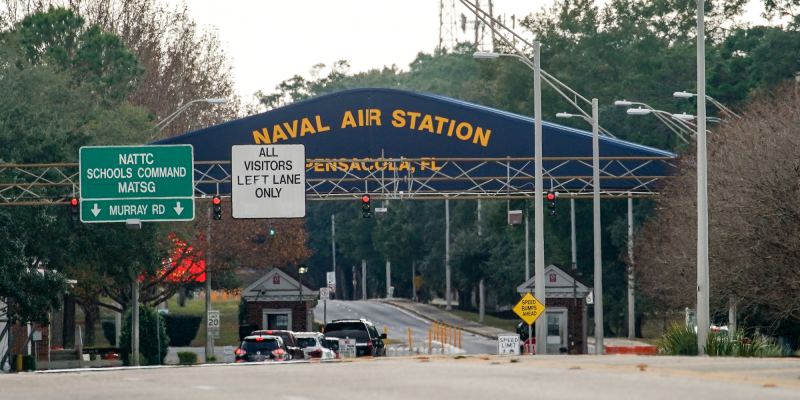 Foto: A general view of the atmosphere at the Pensacola Naval Air Station following a shooting on December 06, 2019 in Pensacola, Florida.sourceGetty Images/Josh Brasted

It’s unclear what will happen in the Pensacola case. Apple has disputed with Barr’s assertion that it hasn’t helped, saying it has given authorities gigabytes of data like iCloud backups and payment information.

However, it won’t do anything about encryption.

A statement said: „We have always maintained there is no such thing as a backdoor just for the good guys. Backdoors can also be exploited by those who threaten our national security and the data security of our customers.“

„Today, law enforcement has access to more data than ever before in history, so Americans do not have to choose between weakening encryption and solving investigations. We feel strongly encryption is vital to protecting our country and our users‘ data.“

The American Civil Liberties Union (ACLU), a campaign group, rallied behind Apple, saying that breaking with its policy for the US government could enable bad actors elsewhere.

Jennifer Granick, an ACLU spokeswoman on cyber issues, said: „There is simply no way for Apple, or any other company, to provide the FBI access to encrypted communications without also providing it to authoritarian foreign governments and weakening our defenses against criminals and hackers,“ ACLU Surveillance and Cybersecurity Counsel said in an emailed statement to Business Insider.

Still, it appears the FBI will not back down easily this time around. According to The New York Times, officials said the FBI only approached Apple after asking other government agencies, foreign governments and third-party technology vendors for help with little success.

„We don’t want to get into a world where we have to spend months and even years exhausting efforts when lives are in the balance,“ Barr said on Monday.

„We should be able to get in when we have a warrant that establishes that criminal activity is underway.“