While companies like Samsung and Huawei are designing phones with foldable screens, Apple is envisioning new designs that could eventually make the iPhone look like just a single piece of glass.

It describes a scenario in which the front, back, and sides of a smartphone are made from glass, possibly providing the illusion that the entire device is made from a single sheet of glass. The patent application also mentions the possibility of adding additional displays on the side or back of the phone if the enclosure is made entirely of glass.

Here’s a snippet from Apple’s description in the application:

[0086] Enclosures having glass defining multiple sides of the enclosure may facilitate or enable numerous additional functions and uses that are not realized with conventional enclosures. For example, glass backs and glass sides may be transparent, allowing the electronic device to include additional displays that are viewable through the sides and/or the back. Moreover, the side- and back-viewable displays may be made touch and/or force sensitive using touch- and/or force-sensing systems, effectively turning the side and back surfaces into additional input devices or surfaces with which a user may interact to control the electronic device.“

Examples of what an iPhone like this could look like are included in the application, and one such drawing shows a device with a display located along its edge. That resembles the approach Samsung has taken in the past with its curved displays, particularly the Galaxy Note Edge from 2014, which as its name implies, has an independent display that runs alongside its edge for accessing app shortcuts. 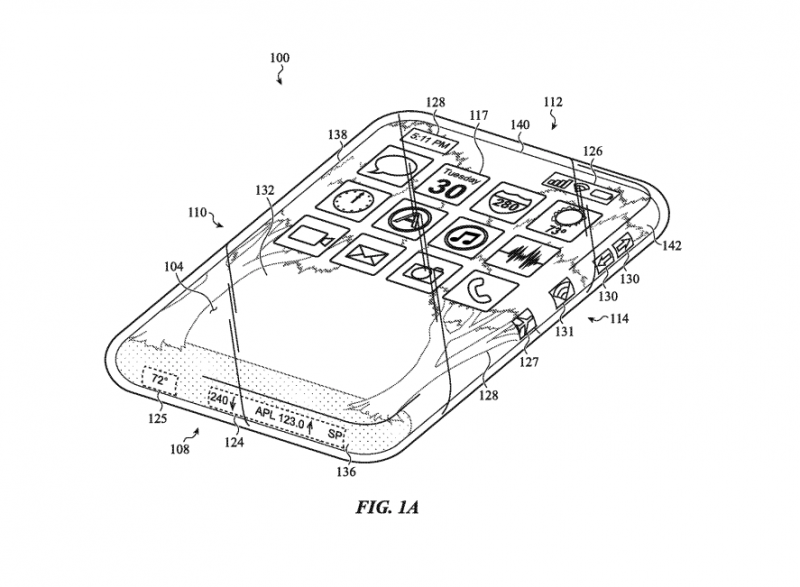 It’s also worth noting that just because Apple has submitted a patent application that would cover an iPhone with an all-glass design doesn’t mean the company will ever release such a product. Some of its patents for wearable technology gadgets, for example, look nothing like the Apple Watch.

But the application does provide an indication that Apple may be thinking about how it could approach experimenting with new form factors for the iPhone at some point in the future, especially as rivals like Samsung, Huawei, and Motorola are launching foldable phones.

The new application is far from being the first time Apple has filed a patent for radically redesigned iPhone. An application from October shows an iPhone with a display that wraps around the entire device, and the company has filed similar patents dating back to 2013.